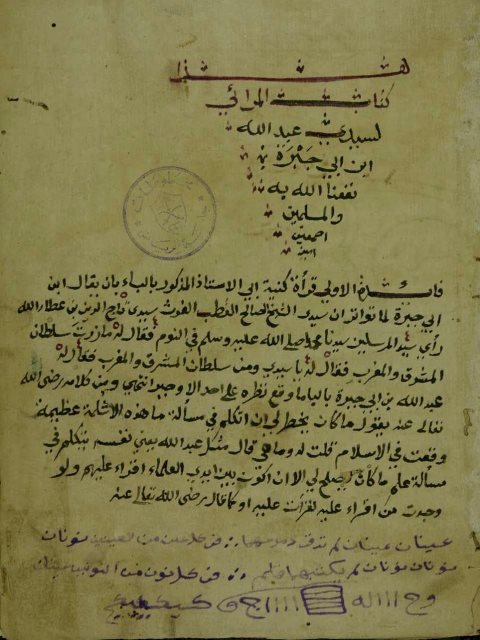 This article discusses experiences of Abū Muḥammad ʿAbd Allah ibn Saʿd ibn Saʿīd ibn Abī Jamrah al-Azdī al-Andalūsī, a great Sufi ḥadīth scholar of seventh century Hijrah, born in Islamic Spain and passed away in Egypt in 675 AH[i] who encountered with the Prophet ﷺ in a dream while engaging with his ḥadīth commentary, Bahjat al-Nufūs wa Taḥallīhā bi Maʿrifat mā Lahā wa mā ʿalayhā’ (Joy of soul and its adorning by knowing what it has and what it owes). It is a commentary of his own work, an abridged version (Mukhtaṣar) of Ṣaḥīḥ al-Bukhārī in which he selected around 300 hadīths by reducing the Isnāds to the first narrator, i.e. the companion. It starts with the chapter of ‘beginning of revelation’ (Badʾ al-Waḥy) and ends with that of people of paradise entering paradise' (Dukḥūl ahl al-jannah al-jannah). Indicating to this organization, Ibn Abī Jamrah entitled this collection ‘Jamʾ al-nihāyah fī badʾ al-khayr wa al-ghāyah (The Gathering of the End at the Beginning of the Good and its Aim).

Ibn Abī Jamrah’s intention behind the abridged version was easy memorization of ḥadīths from al-Bukhārī’s great work. Moreover, he was strongly convinced about its blessedness that ‘distress would be dispelled if Ṣaḥīh al-Bukhārī is read, and ships would be saved from drowning if it is kept in.’[ii] Ibn Abī Jamrah notes that Imām al-Bukhārī had followed a unique method to narrate and organize ḥadīths, therefore, repeated a ḥadīth several times, and sometimes cut down the ḥadīth and mentioned only a tiny part of it. Considering all these distinct features, Ibn Abī Jamrah selected the complete version of ḥadīths from the Ṣaḥīḥ and reorganized it without repetition.[iii]

The most distinctive feature of Ibn Abī Jamrāh’s commentary, Bahjah, is the mystical interpretation. He tried to elaborate on the esoteric meanings of ḥadīths without rejecting its exoteric ones. Mostly, he explained the implied meanings after explaining its apparent meanings.

As he explains in the preface, his book consists of indications to the mystical truth (Ishārah ilā al-haqīqah) along with the rulings, ethics, obligations and voluntary acts of Sharīʾah. This statement designates the obvious feature of this commentary, the Ishārī interpretation, which is also known as mystical exegesis. Moreover, he tried to reconcile between the paths of Sharīʿah and Ḥaqīqah.

As obvious from his works, there is no doubt that the author was a great Sūfī and devoted scholar of ḥadīth. Ibn Ḥajar al-ʿAsqalānī, the later well-known commentator of Ṣaḥīḥ al-Bukhārī, quoted Ibn Abī Jamrah many times in his magnum opus, Fatḥ al-Bārī, with due respect, calling al-Qudwah, al-Shaykh Ibn Abī Jamrah and giving enough attention to his esoteric meanings.

The most pertinent here are his dreams while composing his marvellous commentary. He encountered the Prophet ﷺ in dreams encouraging, and sometimes even instructing simple additions to the book. Such seventy sweet dreams were collated into a book entitled al-Marāī al-Ḥisān (Beautiful dreams) by him. In the preface, the author said: “these are the dreams I experienced while composing the interpretation of Mukhtaṣar Ṣaḥīḥ al-Bukhārī which has been named as Bahjat al-Nufūs”.[iv]

Al-Marāī al-Ḥisān begins with the narration of a trusted person who saw in dream Ibn Abī Jamrah sitting in front of the Prophet ﷺ justifying his explanations in Baḥjat al-Nufūs, and when reached the ḥadīth of Ṣalāt al-Wuṣtā (The middle prayer), and justified his stance, the Prophet ﷺ  applauded it. According to him, Ṣalāt al-Wusṭā is both the ʿaṣr and ṣubḥ prayers.

In another dream, as found in the second narration, he presented his commentary to the Prophet ﷺ. The Prophet ﷺ was so impressed reading its forward and passed it to some of his vicegerents and said his attempts in our matters never fell short. One day the Prophet ﷺ instructed him to add some sentences in the preface. At times he saw the Prophet ﷺ entered his house with his companions. Reading Ibn Abī Jamrah’s commentary, his explanation on the ḥadīth of the slander (al-Ifk) impressed the Prophet ﷺ too much, whereupon he passed it to ʿᾹishah, the mother of the believers, asking to pray for Ibn Abī Jamrah since he had done a good job explaining her innocence. In another dream, he was in Maḥshar in the day of judgment wherein he and his disciple were highly respected and gathered with Messengers and the companions of the Prophet Muḥammad ﷺ due to his service for ḥadīth through this commentary. Seventy such beautiful dreams are explained in 53 pages.

The deeper understanding of the author and his ability to connect ḥadīth with Sūfī concepts is very clear from his explanation on the first ḥadīth itself. “The commencement of the Divine Inspiration to Allah's Messenger ﷺ was in the form of good dreams which came true like bright daylight, and then the love of seclusion was bestowed upon him. He used to go in seclusion in the cave of Hira where he used to worship (Allah alone) continuously for many days before his desire to see his family. He used to take with him food for the stay and then come back to (his wife) Khadīja (May Allah be pleased with her) to take his food likewise again till suddenly the “Truth” descended upon him while he was in the cave of Hira. The angel came to him and asked him to read. The Prophet ﷺ replied, "I do not know how to read…"

He observes that the beginning of the Prophethood was in the form of true dreams, and when he persisted with his Khalwah (seclusion) and worship, he could finally meet the archangel, Gabriel. Likewise, a Walī, seeker of sūfī path, must maintain the manners of each stage of wilāyah to successfully enter to the higher level.[v] Many such ishārī explanations are found with almost all ḥadīth in work.

It is enough of honour for Ibn Abī Jamrah that the Prophet ﷺ had felicitated his commentary.  In fact, it is a manifestation of the Prophet’s statement that he (ﷺ) said: God brightens a man who hears what I say, gets it by heart, retains it, and passes it on to others! Many a bearer of knowledge is not versed in it, and many a bearer of knowledge conveys it to one who is more versed than he is.[vi]

Encountering the Prophet Muḥammad ﷺ in a dream is considered by Muslims as a reliable experience with probative value. That is based on two authentic ḥadīths: ‘Nothing of Prophethood will remain after me except righteous nightly dreams’[vii] and ‘Whoever has seen me in a dream has seen me while awake, for indeed Satan does not assume my form.’[viii]

Many righteous people had narrated their experience of seeing the Prophet ﷺ in dreams revealing the truth to them on personal matters. The unrecorded incidents would be even more. But from the above explanation, it is understood that the dedicated ḥadīth scholars, who always engage with reporting of Prophet’s words, deeds, and chain of narrations, had kept a very special relationship with the Prophet ﷺ. They had communication on various issues related to the ḥadīth, including authenticity and meanings.

Though the dream is not treated as a medium of validating ḥadīth or establishing a ruling, it can add value to ḥadīth. A dream will reaffirm the authenticity of a ḥadīth which is already proven by verifying Insnād and content. Likewise, a dream may reveal some implied meanings of a ḥadīth which is in line with the principles of Islam.