Study of Sunnah: Significance and Challenges 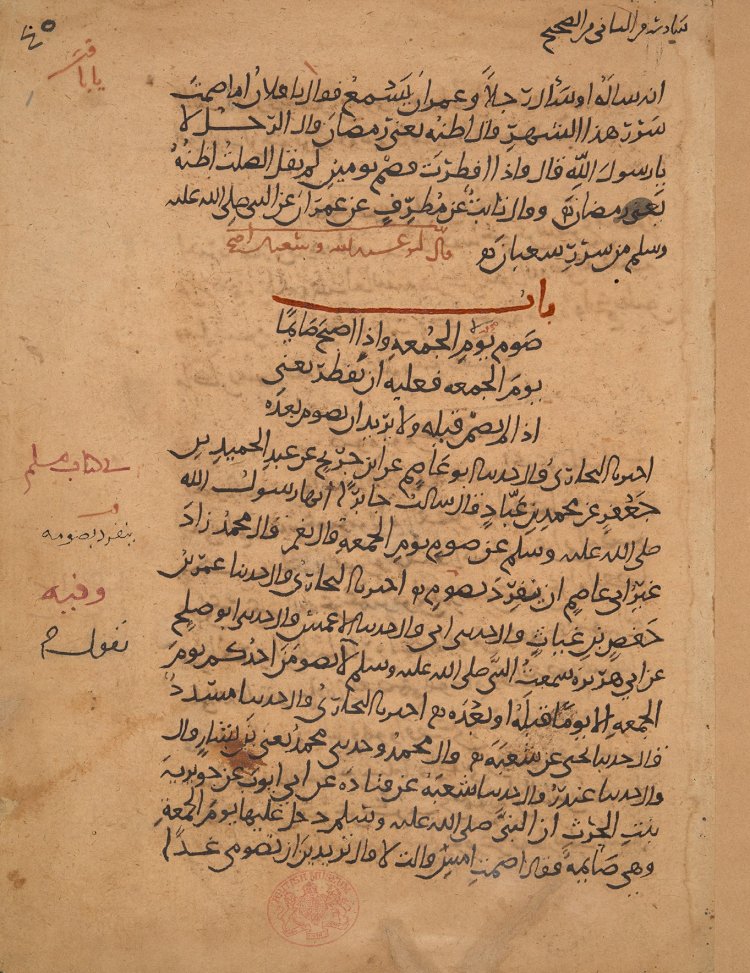 The Messenger of Allah (ﷺ) said, "I have left two matters with you. As long as you hold to them, you will not go astray. They are the Book of Allah and the Sunnah of His Prophet."[i] This statement, along with a number of the like, manifests the significance of Sunnah in Islam. Sunnah means the normative legacy of the Prophet (ﷺ). It is the lens through which the Qur'an is interpreted and understood, though Sunnah stands second to it in terms of reverence. It is also perceived as a manifestation of the Qur'an, and implication of its higher objectives in daily life as the Prophet's consort ʿᾹishah described his character as al-Qurʾan.[ii]  Hadiths are the units through which Sunnah is preserved and understood. It means the report which describes the words, actions, habits and physical features of the Prophet (ﷺ).[iii]

The Qur'an and Sunnah are two rich sources of knowledge. Moreover, they are the sole sources for understanding what is beyond the reason and experience. Unlike the other sources, they provide very clear and certain knowledge that originates from the Noble Creator (ﷻ). The significance of Hadith in Islam is, in fact, that of the Prophet. From his lips, Muslims heard the Qur'an, and from his actions, they knew how to live it. In this sense, Islam was built upon his words and actions. Since he was sent as the perfect model in every aspect of life for the human being, God, the Almighty (ﷻ), protected him from any kinds of sins and mistakes. "(O Messenger!) Tell people: 'If you indeed love Allah, follow me, and Allah will love you and will forgive you your sins. Allah is All-Forgiving, All-Compassionate."[iv]

Sunnah comprises not only rulings and rituals but also a rich ethical provision. Abū Hurayra reported that the Messenger of Allah (ﷺ) said, "I was sent to perfect good character."[v] Scholars have deducted different aspects of ethics related to our everyday life from the sunnah, such as that which pertains to self, family, society, creator and environment. Many intellectuals and thinkers including the non-believers have appreciated the Prophet's teachings as the perfect solutions for various global problems such as rising criminal cases, deteriorating law and order, food shortage, poverty, unemployment and injustice.

However, some malicious attempts have taken place to portray the Sunnah as absurd, unscientific, and the Prophet as a cruel person, hostile to faiths other than Islam, anti-woman, a supporter of slavery etc. First and foremost, it is incorrect to weigh the revelation solely on a scale like human reason and experience. One who attempts to do so, Ibn Khaldūn observes, is like a person who wishes to weigh mountains on a goldsmith's weighing scale.[vi] Moreover, the lack of adequate knowledge about the contexts of specific hadiths, the poor understanding of Prophetic expressions and the social milieu the Prophet (ﷺ) lived in, create problems. However, from the early centuries of Islam, Muslim Scholars have discussed such hadiths in separate works called Mukhtalif al-Ḥadīth (Contradictory Ḥadīths) and Mushkil al-Ḥadith (Problematic Ḥadīths) which could be consulted for their proper understanding. Likewise, it is impossible to deduct a ruling or ethical value by taking one hadith in isolation which is a tiny part of continuous conversations. Therefore, when someone approaches the hadith, he must seek its proper interpretations in reliable exegeses such as Fatḥ al-Bārī the interpretation of Ṣaḥīḥ al-Bukhārī and al-Minhāj the interpretation of Ṣaḥīḥ Muslim by Ibn Ḥajar al-ʿAsqalānī and al-Nawawī respectively. It helps us understand how the early generations have understood that hadith as befitting to Islam's higher objectives.

After the Prophet's (ﷺ) demise, his companions such as Abū Hurayrah, Anas ibn Mālik and the Prophets' consorts became essential sources for hadith. They started narrating what they directly experienced from the Prophet (ﷺ). At this time, some people with wicked interests started fabricating hadith for their vested interests manipulating Sunnah's authority. Eventually, addressing this challenge, Umayyad caliph ʿUmar ibn ʿAbd al-ʿAzīz (d. 720/101) instructed the scholars like Ibn Shihāb al-Zuhrī (d. 742/124) to record hadiths which had been preserved in human memory and some scattered writings.[vii]

Due to the forgeries that occurred for various reasons, especially after the companions' generation, the hadith's authenticity became a perennial concern of Muslim scholars. They started to notice from whom the hadith has been reported, and eventually, a chain of narrators called sanad preceded the hadith's content part, known as matn. The reliability of each narrator was analyzed to evaluate the degree of the hadith from forgery to the very authentic one. It was again double-checked by comparing different narrations from one source and different matns in the same topics. This multi-layered protection given to the hadith still helps us understand the Prophet's (ﷺ) teachings in a very sophisticated manner. This process and related terminologies were discussed in usūl al-ḥadith, also known as ʿūlūm al-ḥadīth, which means principles of hadith and sciences of hadith respectively.

The journeys to collect hadiths (riḥla) are very famous in the history of Islam. The young companions were waiting at the elders' door to hear a hadith that they directly heard from the Prophet (ﷺ). The companions' journeys to propagate Islam were, in fact, journeys of hadith. Therefore, the next generation's voyages were not limited to Makkah and Madinah, rather extended to central Asia, Iraq, Iran, Yemen, Egypt, and even to the Iberian Peninsula.[viii]

Hadith scholars have not followed any chronological order while collecting the hadiths. Therefore, approaching the works of hadith for the Prophet's (ﷺ) history from his birth to demise is not an easy task. Addressing this issue, the scholars have authored the works of Prophet's (ﷺ) sīrah (biography) by arranging available materials from the Quran and Hadith and other extended sources. The hadith's authenticity was not much-scrutinized in these works since they were not related to rulings, believes, or principles but mere history.

In modern times, hadith has been discussed in Western academia as part of Islamic history, and Ignaz Goldziher (d. 1921), a strong sceptic, was in the frontline. He created doubt in the hadith's authenticity, arguing that scholars like al-Zuhrī put some statements to the Prophet's mouth for various material gains. His predecessors like Joseph Schacht (d.1961) came up with similar findings. However, these hypotheses and assumptions were questioned by later researchers, known "Western revaluation", such as Harald Motzki (d. 2019)[x] by using the historical-critical method itself. According to him, there is no concrete evidence in Goldziher and Schacht's studies, which makes an objective researcher doubt hadith's historicity. Unfortunately, their works and thoughts didn't get much attention in modern academia. The sceptics were unaware of how the hadith existed during the companions and the followers' times. It persisted through their life, verbal transmissions from generation to generation, and through some written documents. Whenever they face new challenges, they inquire about their Prophet's (ﷺ) related words and actions. Therefore the Caliph's attempt was not an invention, but mere collection and documentation of scattered information.

In Islamic seminaries, hadith's study begins with short secondary sources.  Focusing on the content; therein, the hadiths are recorded without sanads. Among them, the most famous is the collection of the forty hadiths by Imam al-Nawawī (d. 676/1234), each of them being one of the great precepts of religion, described by religious scholars as being "the axis of Islam " or "the half of Islam" or "the third of it ", or the like.[xi]

Considering the significance of Sunnah in Islam and its challenges from modernists and rationalists within the Muslim communities and Islam's enemies, to revive Sunnah studies popularizing its relevance to different aspects of human life and various global issues is a great need of time. In this section named “Messenger (ﷺ)”, we welcome studies that explore Sunnah and studies that trace its relevance in the modern world, expose the Prophet (ﷺ) as a human embodiment of sharī’ah along with philosophical ruminations on the necessity of Prophethood and revealed knowledge.

[iii] See the definition of Sunnah and hadith in Jonathan A.C Brown, Hadith: Muhammad's Legacy in the Medieval and Modern World, (Oxford: One World, 2009), 3.

[vi] Ibn Khaldūn writes, “The intellect, indeed, is a correct scale. Its indications are completely certain and in no way wrong. However, the intellect should not be used to weigh such matters as the oneness of God, the other world, the truth of prophecy, the real character of the divine attributes, or anything else that lies beyond the level of the intellect. That would mean to desire the impossible. One might compare it with a man who sees a scale in which gold is being weighed, and wants to weigh mountains in it.” Ibn Khaldūn, The Muqaddimah: An Introduction to History , trans. Franz Rosenthal, (Princeton, NJ : Princeton University Press, 2005), vol.3, p. 38.

[vii]  Some companions were writing hadiths for their personal use as evident from Abū Hurayrah's testimony: "There is none among the companions of the Prophet who has narrated more Hadiths than I except `Abdullah bin `Amr (bin Al-`As) who used to write them and I never did the same.” Muḥammad ibn Ismāʿīl al-Bukhārī, Ṣaḥīḥ al-Bukhārī, (al-Qāhirah, Dār al-Shaʿb, 1987), vol.1, p. 39. For a comprehensive survey of pre-classical literature see Mustafā Azamī’s Studies in Early Hadith Literature.

[x] See the classification of western researchers on hadith in Jonathan A C Brown, 197.