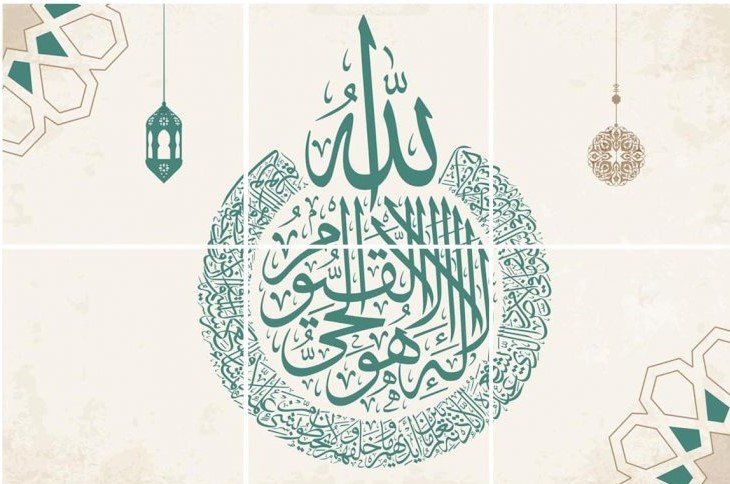 Allah, there is no god but Him, the Ever-Living, the Ever Watchful. Neither slumber nor sleep overtakes Him. All that is in the heavens, and the earth belongs to Him. Who is there that can intercede with Him except by His permission? He knows what is before them and what is behind them, but they do not comprehend any of His knowledge except what He wills. His throne extends over the heavens and the earth; it does not weary Him to preserve them both. He is the Most High, the Tremendous

The Āyat of al-Kursī is verse number 255 from Sūrah al-Baqarah, and it is known as ‘Master of the Noble Qur’an’ because of its tremendous and countless favours and blessings in reading the āyat. Reciting the āyat brings the closeness to Allah, the calmness of the soul, and the cure for many physical and psychological diseases.

The āyat has collected many beautiful names of Allah, particularly it consists of al-Ism al-Aʿẓam, (the greatest name of Allah), which by spelling it, prayer will never be left unheard.

The title of Kursī derives from the verse "His throne extends over heaven and the earth", according to Ibn Abbas, Kursī is the throne where the feet of Allah mounted (maʿnawī/majāzī). The throne here means the symbol of the kingdom, which evidences the absolute divinity of Allah the Almighty.

The content of āyat has the greatness of comprising the most beautiful names of God as follow:

Allāh: It is a comprehensive name for all the meanings of divinity and the attributes of perfection.

Al-Ḥayy: It refers to all the meanings of His eternity, infinity, or immorality; Ever-Living; Eternal.

Al-Qayyūm: It aims to THE ONE who sustains and protects all that exists; Self-Sufficient Master; the Superb Upright Sustainer; the Ever-Watchful

Al-ʿAliyy: It indicates all the meanings of His highness and dominance; the Sublime; the Ever-Exalted

Al-ʿAẓīm: It denotes the collection of Him for all the characteristics of pride and greatness; the Tremendous; the Ever-Magnificent; the Supreme; the Glorious

Allāhu lā ilāha illā huwa is a confirmation of waḥdāniyyah in the first place and His saying al-ḥayy al-Qayyūm (Ever-Living, Ever-Watchful) refers to ulūhiyyah to show who is Allah in terms of attributes and his saying lā ta'khudh hu sinatun wa lā nawm (Neither slumber nor sleep overtakes Him) shows how vigilantly Observant, Ever-Watchful He is, the worthy of worship.

His saying lahu mā fi al-samāwāti wa mā fi al-arḍi (All that is in the heavens and the earth belongs to Him) demonstrates His greatness and His perfect possession so that no one can act in His possession except with His permission, which is the answer to the question comes in the next verse seconding His saying man dhalladhī yashfaʿu ʿindahu illā bi idhnihi (Who is there that can intercede with Him except by His permission?); Allah permits the intercessors to intercede, none can intercede without His permission. It is a response to the polytheists who took the intercessor without Him. It ironically declares that none has the power to rule out Allah's aptitude.

His words, ya'almu mā bayna aydīhim wamā khalfahum (He knows what is before them and what is behind them) is a narrative that God is all-knowing of all creatures, past, present and future, and of all awareness of the whole or part; section or unit; particle or atom. This recital is to prove that no one can perceive the message except He allows it to go wa lā yuḥīṭūna bi shay'in min ʿilmihi illā bi mā shā'a (but they do not comprehend any of His knowledge except what He wills).

His saying wasiʿa kursiyyuhu al-samāwāti wa al-arḍa (His throne extends over the heavens and the earth) is the sign of the glory of the throne, which is the place where God's feet are mounted. Therefore, protecting the realm of the heavens and the earth is not an issue for Him, walā ya'ūduhu ḥifẓuhumā (it does not weary Him to preserve them both). Indeed He is much higher than humanly comprehendible, and He is larger than life, wa huwa al-ʿaliyy al-ʿaẓīm (the Most High, the Tremendous).

Allah has not created in the heavens nor in the earth what is more magnificent than Āyat al-Kursī. Sufyan said: Because Āyat al-Kursī is the speech of Allah, and Allah's speech is greater than Allah's creation of the heavens and the earth. [Sunan al-Tirmidhi]

Whoever recites Āyat al-Kursī at the end of every obligatory prayer, nothing but death will prevent him from entering Paradise. [al-Nasā'ī]

The Prophet ﷺ put me in charge of the Zakat of Ramadan (i.e. Zakāt al-Fitr). Someone came to me and started scooping some of the foodstuffs of (Zakat) with both hands. I caught him and told him that I would take him to Allah's Messenger. Then Abu Hurairah described the whole narration and added, "He (i.e. the thief) said, 'Whenever you go to your bed, recite the Āyat al-Kursī for then a guardian from Allah will be guarding you, and Shaitan will not approach you till dawn.' On that, the Prophet ﷺ said, "He told you the truth, though he is a liar, and he (the thief) himself was the Shaitan." [Sahih al-Bukhari]

(Mohamed Aslam Akbar is an Assistant Professor in Shari'ah Sciences and Heritage at the Department of Economics, Kulliyyah of Economics and Management Sciences at International Islamic University Malaysia)