The Inheritor of Earth: Man and his Liability towards Nature 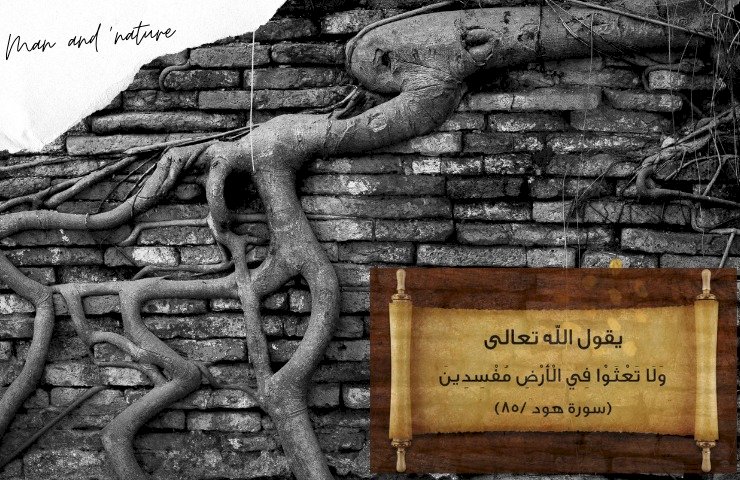 With life as short as a half-taken breath, don’t plant anything but love.

Man is Allāh’s viceregent (Ḳhalīfah) on earth. The World with all its bounties has been created for man’s sustenance. We inherited this earth from our father Adam (peace be upon him), and thus we have some duties and responsibilities. It is upon us now to preserve, nurture, and make the Earth more beautiful than we found it. A befitting legacy for the ones to come after us. As the Qur’ān outlines:

“And seek the abode of the Hereafter with the wealth that Allah has given you, and do not forget your part in this world, and do favors (to others) the way Allah has favored you, and do not seek to cause turmoil in the earth; indeed, Allah does not like the mischievous.” [1]

Allāh the exalted created the world to be human’s temporary abode, a testing place. A place where he would be given free will and judged according to his conduct. All the creations were made signs of the existence of the Almighty. So that, when a human contemplates, he sees the clear signs and knows his Creator. Even though the world is created and made a tool for the human to reach the hereafter, it does not mean that he can take infinitely from nature without consequences. The correct approach to the world is fulfilling your needs and not your endless desires. The great 12th century Sufi, Imam al-Ghazali beautifully points this out in his book “The Alchemy of Happiness” (Kīmīyā-i-Sạ’ādah):

“The world is like a table spread for successive relays of guests who come and go. There are gold and silver dishes, abundance of food, and perfumes. The wise guest eats as much as is sufficient for him, smells the perfumes, thanks his host, and departs. The foolish guest, on the other hand, tries to carry off some of the gold and silver dishes, only to find them wrenched out of his hands and himself thrust forth, disappointed and disgraced.” [2]

Nowadays, it is a grim sight to see man acting as the foolish guest and destroying all nature for his selfish desires. His greed knows no bounds and consumes all in its wake. Food, clothes, and shelter were the basic requirements of the primitive man. He was a guardian and a benefactor from these resources. But the modern man brought forth the idea of “consumerism”; he didn’t just want to benefit; he sought to consume!

While the primitive human hunted for food and cloth, the modern human poached for money, fame, honor, and “sport”. Where the predecessor needed a spot to shelter himself from heat and cold, his modern successor desires a fully furbished mansion with sea-side views. When the primitive wanted clothes for protection from extreme surroundings, the modern believes in fast fashion and separate wardrobes for different brands.

This sharp contrast between the primitive and modern depicts where leaving guardianship and embracing consumerism has led us. As a result, the wildlife extinction is at an all-time high, the flora is being depleted at alarming rates, glaciers are melting, the ozone layer ruptured, pollution is rampant, fossil fuels are insufficient, and all these are a consequence of man’s unending lust.

Take recent floods in India, for example, in Maharashtra, Karnataka, Himachal Pradesh, J&K, and Ladakh. All these districts are facing heavy casualties due to recent surges. As of July 2021, approximately 100 hundred villages in Maharashtra face threats from landslides where water has risen to 25 feet at some places. One hundred eighty people have lost their lives in mudslides.[3]

Thus, in these dire times, we need to identify the virtues of the viceregents of Allāh, the true inheritors of Adam and the wise guests of this world. Islam has the solution for both these increasing problems; first, the dignity of the Earth is reminded to us. The Qur’ān commands: “And do not walk haughtily on the earth.” [4] Also: “And the bondmen of the Most Gracious who walk upon the earth humbly, and when the ignorant address them they answer, ‘Peace’.” [5] Also it says: “And do not spread turmoil in the earth after its reform.” [7]

After understanding the dignity of Earth and abstaining from spreading turmoil, we are reminded that extravagance in living is also deplorable. The Qur’an says: “…and eat and drink and be not extravagant; surely He does not love the extravagant.” [8] The Prophet of Islam ﷺ said: “There will be men from my nation who eat a variety of foods, drink a variety of drinks, wear a variety of clothes, and are boastful in their speech. These are the worst of my nation.” [9] Hence, If we learn to use according to need instead of greed, we will reach the goal of a viable future. All we need to do is “choose wisely” and “use modestly”, which is the Islamic way of life.

Now, it is of paramount importance that we understand, along with sustainability, the duty of preserving flora and fauna. Islam is a religion of mercy and rewards those who serve all the living beings. A Hadith states: “The Companions said,” O Allah’s Messenger! Is there a reward for us in serving the animals?” He ﷺ replied: “There is a reward for serving any living being.” [10] Furthermore, plantation was encouraged greatly as the Prophet of Mercy ﷺ said: “No Muslim plants a plant or sows a crop, then a person, or a bird, or an animal eats from it, except that it will be charity for him.” [11]

In this manner, sustainability, loving the fauna, and preserving the flora is not some sidelined pro-Earth agenda by some organizations. Rather, it is a religious duty of every Muslim and a responsibility deeply rooted in his religious framework. Therefore, the Islamic approach to the issue is not a contingent cure but a profound precaution. We are not ordered to exploit the forests till they deplete and then, in a fit of desperation, set up plantation camps. Rather, we are ordered to be modest in our needs and plant trees as charity. It is an act that benefits us in the hereafter and beautifies our world as well.

Man and nature are intertwined to a great extent. One’s worldly existence is incomplete without the other. Being the best among creations, there is a great responsibility on our shoulders. Henceforth, we should ensure that nature is preserved, sustained, and taken care of and peace prevails.

Fardeen Ahmad Khan Razvi is an Oriental Research Scholar who has authored over a hundred articles and twenty plus booklets on Islamic and other oriental subjects in Arabic, English, Urdu, and Hindi. His minor is in Computer Applications pursuing his Major in Data Science. He is also an eloquent Urdu poet coming from a Sufi background in Northern India.