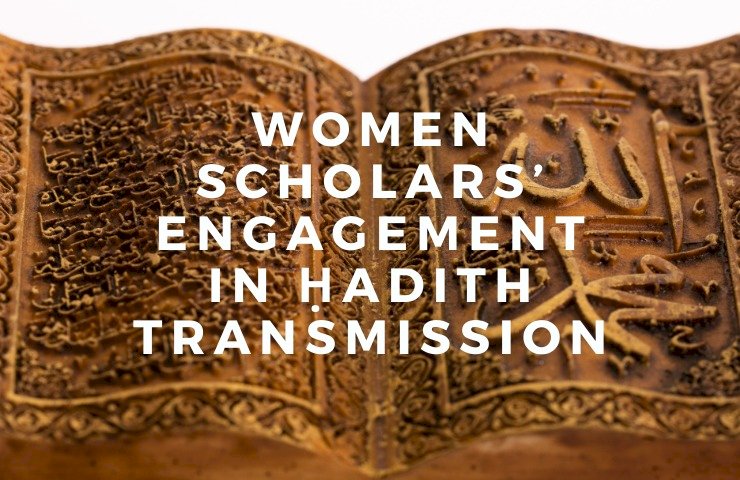 It is one of many prevalent misconceptions today that in Islam, women are historically marginalized in religious education. But, after delving deeply into Muslim women’s glorious history, to draw such a conclusion appears to be invalid. While there are some false narratives that Muslim women were denied education and moved into the educational arena just after certain modernist concepts were introduced in Muslim occupied societies, it is significant to revisit the history of Muslim women’s activities related to different fields of knowledge production. Here, their roles and contributions towards the transmission of ḥadīth are analyzed.

Muslims recognize ḥadīth as the most authentic account after Qurān. Islamic laws and instructions are mainly taken from the Qurān and ḥadīth. Since the grade of each ḥadīth may vary based on the authenticity of its narrators, extensive works were made on ‘ilm al-Rijāl (biographical evaluation of narrators).i It is noteworthy that the biggest virtue of women narrators is what Imam Dhahabi (d. 1348 AD) certifies them on his book of Mīzān al-I‘tidāl fī naqd al-Rijāl: ‘It isn’t known to me any of women narrators who were accused (of a lie) or abandoned (Wamā ‘alimtu fi al-Nisāi man ittuhimat walā man tarakūhā)’.ii

During the Prophet’sﷺtime, Ṣaḥābiyyat (female companions) used to approach him seeking fatwā, and some of them served him at battlefields. Thus, they shared eventful moments with him ﷺand later became transmitters of ḥadīth. ʿĀyisha(d. 678 AD) and Ummu Salama (d. 680 AD) together with other wives of Prophet ﷺ(Ummahāt al-Mu’minīn) were instrumental in the initial stages of ḥadīth transmission. Moreover, many of the senior companions used to consult them on legal affairs. Likewise, other female companions like Ummu Dardā' al-Kubrā (d.700), Shifā bint Abdillāh (d.640), Fāṭima bint Qaīs, Asma' bint Sakan (d.683), and Ḥamna bint Jaḥsh(d.641) played a major role in the transmission of ḥadīth.

While going through the frequent narratives bringing Islam into question and charging it with the responsibility of women’s suppression, it is remarkable to recall the attitudes of the Prophetﷺ and his companions towards women’s participation in educational realms. The Prophet ﷺconsulted his companions obeying Allāh’s command: "And consult them in affairs” (washāvirhum fi al-Amr)iii. On certain occasions, he interacted with women before taking key decisions and acknowledged them whenever possible.

Muslims went to Mecca expecting to perform Hajj, but they were stopped from entering the land, and later the Treaty of Hudaybiyyah took place. Thus, the Prophet ﷺordered his companions to sacrifice their animals and shave their heads to come out from the state of Ihrām. Even though the Prophet repeated his command thrice, none of them did so since the terms of the treaty seemed to them biased and one-sided. Then, the Prophet ﷺ went to his wife Ummu Salama and informed her about what he faced from his companions. She said: “O Prophet of Godﷺ, if you wish, go out and don’t utter a word to any of them until you have sacrificed your camels, called your barber, and shaved your head.’ She advised the Prophet ﷺto act decisively, and the companions would follow him.iv

Similarly, ʿĀyisha, Umar bin Al-khaṭāb(d. 644 AD), Zayd ibn Thābit (d. 665 AD), and other jurists from Ṣahaba rejected the ḥadīth of Fāṭima  bint Qais when she reported that while she was divorced, the Prophetﷺ didn’t demand her husband to bear the cost of her expenses until her ‘iddah (the period after which she is allowed to re-marry) was over. They justified that it goes against the Qur’ānic admonition v that men must make adequate provision for the comfort of the wife during ‘iddah.vi  If they were persuaded by any patriarchal attitudes, they would have followed Fāṭima’s ḥadīth since it seems to be favourable for men.

The same scenario continued to the next generation after the Prophet, during the period of Tābiʿiyyāt. Women intervened in the court verdicts when unjust judgments were produced. A great example could be drawn with an incident narrated in Imām Mālik’s al-Muwaṭa’. Abū Bakr bin Muhammad bin ῌazm (d.737 AD), the Qādi of Madīna, made a judgment on a Christian thief, who had stolen iron rings, to cut off his hand. WhenʿAmra bint ʿAbduraḥmān (d.721 AD) heard this judgment, she sent a messenger called Umaima to the Qadi, who was her nephew too. She said: Your aunt ʿAmra says: O nephew, are you holding a thief in custody for a minor thing and going to cut off his hand? When the messenger realized that the Qadi was still persistent on his decision, she said: ‘Amrah says to you that there is no cutting off the hand except for something worth a quarter of a dinār or more. Then, the Qadi released the thief because he could not disagree with the valid argument raised by ‘Amrah based on the Prophetic hadith.vii Similar to ‘Amrah, Ḥafsa bint Sīrīn (d.719 AD) and Ummu Dadrā’ al-Ṣughrā were among major female figures who excelled in ḥadīth narration.

Unfortunately, when falsifications were pervasive in the narration of ḥadīth by the end of the first century, it required professionalizing and bringing in certain strict criteria to validate the authentic transmissions. Since these measures didn’t accept written transmissions, sometimes it called for long journeys just for acquiring a single ḥadīth. Women weren’t able to compete with these standards, and their contributions in ḥadīth narration went down for a time span of the next two and half centuries.

However, when the written transmissions began to be accepted widely, women reappeared to be active in ḥadīth transmission.  Reading through the medieval historical sources, it is easy to understand that women were held the equal position of men in this field. Women scholars like Zaynab bint Kamāl (d.1339 AD) and ʿĀyisha bint Muhammad bin 'Abd al-Hādi (d.1438 AD) excelled at co-educational activities in their late ages. In the index compilation of Mu‘jam al-Samā‘āt al-Dimashqiyya, Zaynab bint kamāl is mentioned thirty-three times as a presiding authority, either alone or together with other teachers, over Majālis al-Samā‘āt (assemblies of hearing ḥadīth).viii In order to prevent corruption in ḥadīth transmission, short isnāds (the chain of narrators starting with last narrator and ending to the Prophetﷺ) were favoured. Therefore, many senior scholars transmitted to very young boys and girls and gave them Ijāzāt (certifications). This system permitted the transfer of authority from teacher to young children before they actually studied the work, foreseeing that students would learn the material at an appropriate age in future.ix Subsequently, like Zaynab and ʿĀyisha, many women studied ḥadīth at early stages of their life and later they engaged with transmitting ḥadīths to their students including both men and women. These women’s biographies are recorded in Ibn Hajar's (d.1449) Al-Durar al-Kāmina and in Al-Sakhāwi's (d. 1497 AD) Al-Ḑaw’ al-Lami‘. Thus, Ibn Hajar al- ‘Asqalāni reports that when Zaynab bint Kamāl died, she possessed a camel load of Ijāzāt. x

Similarly, the standards for being accepted in ḥadīth transmission were to be Muslim, legally mature, of sound mind, precise, honest, trustworthy, and just. And the ḥadīths transmitted by narrators were directly accepted if they possessed these qualities regardless of their gender. Imam Shawkāni’s (d.1834 AD) statement can be considered as an excellent example as he states that no scholar has ever rejected the tradition of a woman on the basis that it was just narrated by a woman.xi

In the next part, a brief biographical sketch of the prominent women ḥadīth scholars, including Karīma Al-Marwaziyya (d.1071 AD), Fāṭima bint Sa‘d al-Khair (d. 1203 AD), and Shuhada al-Khātiba (d.1112 AD) would be drawn. The causes of the decline of women’s participation in ḥadīth and related studies would also be analyzed, followed by the highlights of major scholar’s views regarding women’s public appearance for the sake of acquiring knowledge.

Women and transmission of religious knowledge in Islam, Sayeed, A, 2013, Cambridge University Press

Teaching the words of the prophet: Women instructors of the ḥadīth (fourteenth and fifteenth centuries, Abou Bakr, Omaima (Cairo University)