Observing Jacinda Ardern as a Shepherdess with Islamic Leadership Traits 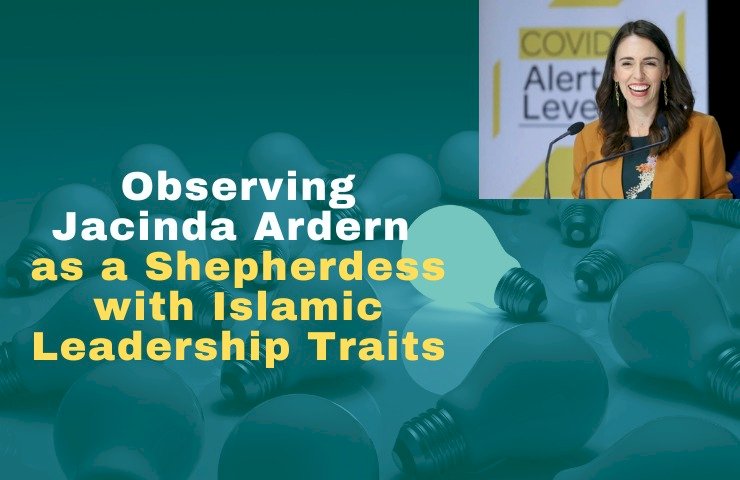 “No doubt, every one of you is a shepherd and is responsible for his flock.”  (Ṣaḥīḥ al-Bukhārī 7138, Ṣaḥīḥ Muslim 1829)

While mentioning the word ‘leader’, a shepherd might be the last thing that will cross one’s mind, if it ever does. Now, why is shepherd the most deserving to be metaphorized for leadership? What relevance does a shepherd have in the modern world?

In the chessboard of the world leadership, Jacinda Ardern, the Prime Minister of New Zealand, stands out among others like Putin, Merkel, Trump, and Macron, effectively checkmating New Zealand’s problems. Jacinda’s frequent appearance in the news for her unique leadership makes her an interesting subject for this discussion. Do successful world leaders like her have some “shepherdiness” in them?

Traits of a Shepherd: Lessons from the Past

In Islamic perspective, a leader is accountable to his creator, Allah, for the flock he or she is in charge of. Umar (r), the Second Caliph and one of the greatest leaders of all time, once said: “If a mule were to stumble on the bank of the Euphrates, I would’ve feared Allah asking me about it, why I did not pave the way for it”.i Accountability sprouts from trustworthiness, in which the Islamic leadership is rooted. As a versatile metaphor, shepherd fits scenarios of mother-children, teacher-students, scholar-follower, ruler-ruled, or anybody that other people look up to. We all are either flock or shepherd at every point of our life.

The act of shepherding demands patience and, despite the toil, may not bear fruit. One or two of the sheep may be subject to death or an attack by a wolf. Bringing a flock into prosperity is a gradual process, which is exactly how leadership works. To bring up a flock collectively, one must know them individually. Although a leader works with a team, he or she must be able to look at them as individuals and see them for what they are individually capable of. The example of a shepherd also implies that a leader does not always lead from the front but also pushes from behind.

The Prophet ﷺ said about Abudharr al Ghifari (r): The earth has not carried nor has the sky covered a man more trustworthy or truthful than Abu Dhār.ii Yet, When Abu Dhār (r) asked genuinely for a role of leadership, the Prophet ﷺ declined. The messenger ﷺ instead appointed Mu'adh bin Jabal (r), who was only eighteen at the time. Although the Prophet ﷺ had testified Abu Dhār’s purity in intention, he saw some incapability in him and found Mu'adh (r) more appropriate for the job. It was not about finding Mua’d (r) a better person than Abu Dhār(r). But it was about knowing the companions truly and finding the most apt one to do what needs to be done.

Caliph Umar (r) used to wander at night, to know his people and their issues, disguised. He resolved issues and sometimes got live feedback about himself and his ruling. There are many incidents of Umar (r) settling matters of people only by the night walk.

On one such night, Umar (r) oversaw, a caravan sitting by a fire, with his servant. Concerned by a crying infant from a nearby tent, the Caliph approached the tent and asked why the infant was crying. The mother replied that she was trying to wean him while he refuses. Upon Seeing an infant barely a few months old, the Caliph confronted her on weaning him at such a young age. Unaware that she was speaking to the Caliph himself, she replied in anguish that the allowance made by Umar was prescribed only for the weaned children, not infants. She was weaning him for the sake of ration. Her response left the Caliph shocked, and his companion heard him repeating in regret: “Woe to Umar! How many of the children of Muslims has he killed?!”. He reassured the mother that the problem would be fixed and asked her to feed the baby. The following day, he decreed that there would be a government allowance for every newborn child. The incident reveals the Caliph’s sense of accountability and how effective his technique was in understanding the public. Amongst many things that make the shepherd attractive is his or her accountability for the flock, despite not owning it. The safety and prosperity of the flock comes first for the shepherd, and at the end of the day, s/he will be liable for the job.

The Prophet ﷺ said about Umar (r) that, had there been a prophet after him, it would have been Umar (r). His holy words were the greatest testimonial for Umar as a successful leader. Interestingly, Umar (r) used to tend his father’s animals while he was young. In the example above, Umar (r), the one in the leadership position, stepped down and removed the intimidating element about him to know the public better. 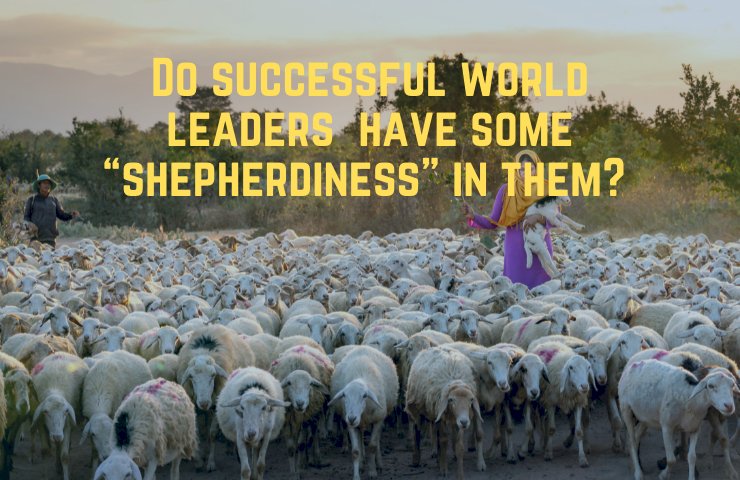 The job of a shepherd also demands both physical and emotional vigilance and leniency together. It is futile to be harsh at a flock of sheep despite how irresponsive they can be to your guidance. Sheep are docile creatures, whereas harsh dealing will stray them. Leniency is supreme in leadership as well, while it should not be sacrificed for the sake of firmness.

During the battle of Uhud, a few companions were appointed on a hill as archers. However, misconceiving the situation and thinking the battle to be won, the majority left their spot, costing the lives of 70 companions and a near defeat. To make matters worse, the Prophet ﷺ himself got hurt on the face. Under these circumstances, the Prophet’s anger at them is completely justified. But Allah stated:

“So, by mercy from Allah, [O Muhammad], you were lenient with them. And if you had been rude [in speech] and harsh in heart, they would have disbanded from about you. So, pardon them and ask forgiveness for them and consult them in the matter. And when you have decided, then rely upon Allah. Indeed, Allah loves those who rely [upon Him].” (Qur'an 3:159)

This verse sums up the leadership qualities that must be exhibited in crisis. Had it not been for the excellent conduct of the prophetﷺ, the companions would have wavered. It was indeed themselves who made the mistake and invited attack and yet, the Prophet ﷺ was asked to be lenient and be extra considerate. This is so, because the followers’ love for the leader is crucial for long term success.

Another characteristic of a shepherd is preparedness. A shepherd travels lightly, lives on less and expects less while utilising resources to the fullest. There is also frequent exposure to dangers, forcing a shepherd to be vigilant and pragmatic. Crisis puts his or her leadership to test.

Clarity is also key in crisis management. For the Prophet ﷺ, the accusation of adultery on Aisha was a mental crisis and a painful episode. Despite his instinct assuring him of her innocence or the lakh of evidence making the truth murky, he did not make a statement of his own. He waited for an official statement from Allah and sought the counsel of his companions, even from those younger than him. He was open to advice and did not state harshly about the accused or the accusers until the ambiguity was cleared. He could have acted on his instinct and saved himself and his family from the mental anguish that lasted over a month. But he awaited clarity in making a final decision.

Such a shepherd-flock model also indicates that Muslims are to be structured as a community. Modern people’s tendency to abandon the great shepherds like the thabi’ūn, Imams of madhabs, and scholars and wander off as lone sheep will invite danger for the entire flock. When making decisions affecting the entire community, they do not seek the counsel of others. They should be reminded that lone sheep get attacked by wolves first. 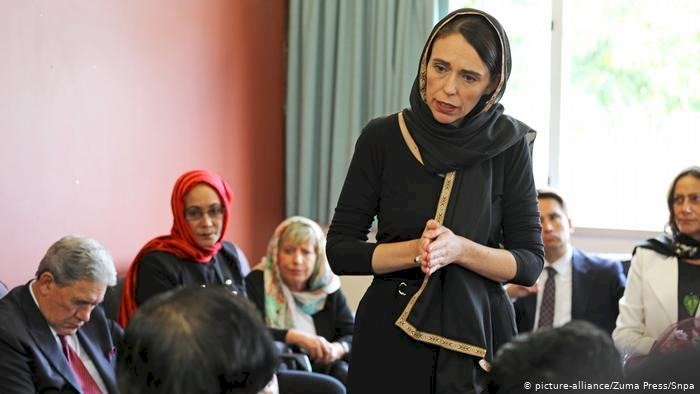 The efforts taken by Jacinda Ardern, the PM of New Zealand, has made her celebrated not only amongst her people but also globally. She could show the world how an ideal leader should be. Leaders must take measures to know their subjects well and, at least at some point, rely on data coming directly from them. She appeared on Facebook live in casual clothing and discussed the Covid crisis with her people. While most leaders resort to reporters or officials as ‘representatives of people’, her approach is always unique. Similar to what we have seen in our past Muslim leadership, Ardern has made herself appear more casual, prompting the public to open up. In other words, she is truly Islamic in so many of her leadership traits.

The leniency trait that we discussed above is also well-exhibited by Ardern. She once said that her leadership is rooted in kindness and empathy. Her leniency makes her even approachable to children, and she is known to have taken the queries of children seriously. For instance, in 2018, she set out her plan to ban single-use plastic bags throughout the country, with retailers facing fines of $65,000 (£33,000) if they failed to do so. All because she received letters from school children regarding the issue.

Ardern’s leadership style has enabled her government to achieve milestones such as cheaper doctor visits for half a million people, increased minimum wage up to $17.70, building classrooms for 100,000 students, and bringing unemployment to the least rate in the last 11 years in New Zealand.

The terrorist shooting in Christ church was a moment of crisis for the country, bringing Ardern to the global attention as a strong leader. The shooting was a crisis because it tempered the confidence of the Muslim community in the safety of their homeland. Also, it could have tarnished New Zealand’s identity by making the country’s security for its citizens questionable. However, Jacinda handled this gracefully. First, she empathized with Muslims, showed support, and disowned the act by addressing the shooter in her address: “You may have chosen us, but we utterly reject and condemn you”. She also made New Zealand’s position in the matter clear. She said that the country condemns the act and the shooter and that neither he nor the act has any place in New Zealand. Not simply talking the talk, she strictly regulated the ownership of weaponry by citizens within six days of the shooting. Her act rippled positivity throughout the globe, and New Zealand’s position was clarified.

To conclude, we should acknowledge the act of shepherding made by Jacinda as a political leader and a good human being and keenly observe what made her leadership distinguished from others. She has applied some universal values that are religiously rewarded from an Islamic point of view if someone does them with an Islamic belief. All the present and future leaders should enact such values to their excellent levels, for the sake of their people, no matter what religion they are practicing.