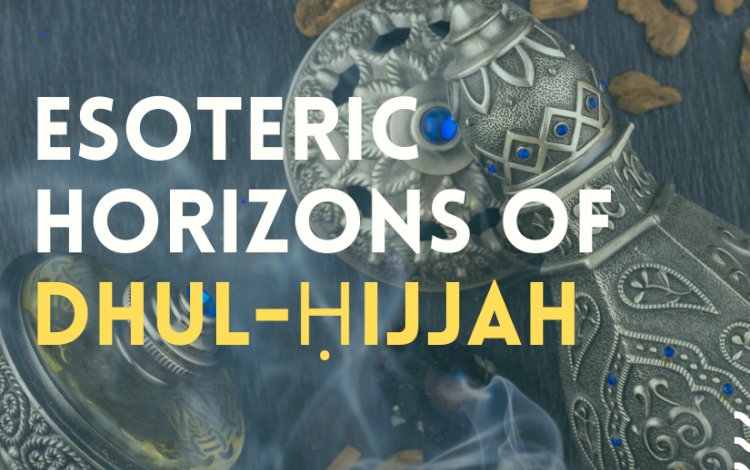 As the crescent of the blessed month dazzles the sky, Muslims around the world rejoice in ecstasy. It is the arrival of Dhū al-Ḥijjah, the month of Ḥajj (the ritual pilgrimage) and sacrifice. Ḥajj is the fifth pillar of Islam. And the ritual sacrifice (Urdu: Qurbani, Arabic: Uḍḥiyah) is an act of worship, which reminds us of the great sacrifice of the Prophet Ibrāhīm. Pilgrims from around the globe flock towards the Holy city of Makkah and Madinah to purify their hearts and experience the divine manifestations of the magnificent Kaʿbah and the Rawḍah of the Beloved Prophet Muḥammad ﷺ. It is the month in which Muslims celebrate the second Ẹīd of the year called Ẹīd ul-Aḍḥā, on the tenth day. The two key acts in this holy month are the pilgrimage and the sacrifice; here, we will explore the esoteric horizons of the latter.

The episode starts with a dream in which Prophet Ibrahim was commanded to sacrifice his beloved son Ismāīl, whom he had prayed for long.  The next day he told the same to the young Ismāīl and asked for his thoughts on this. Being a firm believer like father, he responded positively to the divine decree saying that He should definitely follow the Lord’s command; and, with Allāh’s help, his father would find him, patient. When the father laid his son on his forehead, Almighty Allāh told Prophet Ibrāhīm that his dream had come true and ransomed Ismāīl with a “great sacrifice” which was a ram (big-horned sheep) from paradise, The Almighty declared this as a great trial for Ibrāhīm and that he had succeeded in this flawlessly. The Qur’ān [1] describes this incident beautifully:

- We, therefore, gave him the glad tidings of an intelligent son. -

- And when he became capable of working with him, Ibrahim said, “O my son, I dreamt that I am sacrificing you - therefore now consider what is your opinion”; he said, “O my father! Do what you are commanded! Allah willing, you will soon find me patiently enduring!”-

- Then (remember) when they both submitted to Allah’s command, and Ibrahim lay his son facing downwards. (The knife did not hurt Ismail) -

- “You have indeed made the dream come true”; and this is how We reward the virtuous. -

- And We rescued him in exchange of a great sacrifice. -

- And We kept his praise among the latter generations. -

-Peace be upon Ibrahim! -

-This is how We reward the virtuous- He is indeed one of Our high ranking, firmly believing bondmen.

Imam Faḳhr al-Deen al-Rāzī in his exegesis [2], “Mafātīh al-G̣haib” alias Tafsīr al-Kabīr narrates that this great test was to exhibit the unreserved obedience of the Prophet Ibrāhīm (peace be upon him) towards his sublime Lord.  Also, the divine statement, “You have indeed made the dream come true.” means that he had succeeded in this test and achieved the stations the test was meant for.  “And We kept his praise among the latter generations.” It depicts that Allāh the exalted has kept his praise in the form of the ritual sacrifice, preserved through the later generations.

There is a plethora of thought-provoking and soul-nourishing content in this incident. One is a clear message that the dearest thing to us should be the divine will of Allāh Almighty, and none, not even our progeny, should keep us from fulfilling our duties towards Him.

Such is the merit of a believer that he openly proclaims [3]: Say, “Undoubtedly my prayers and my sacrifices, and my living  and my dying are all for Allah, the Lord of The Creation.” [6:167]

Another esoteric meaning behind the ritual sacrifice is that since human is witnessing death in front of his eyes, that reminds us of the eternal truth, “al-Baqāu Lillāh” everlastingness is only for the Almighty Allāh.

Sacrifice thus reminds us of the mortality of the mundane world. Contemplating this reality makes a believer realize that instead of worrying about worldly life, he should focus on the hereafter, a place that will grant him eternal happiness. Moreover, sacrificing the wealth (with which we buy the animal for sacrifice) voluntarily is a form of reminder to self that our wealth and life are all for the sake of Islam, and we should invest them in noble causes.

Based on this notion of sacrifice, the Sufis devised a practice known as “al-Maut bil-Irādah” dying voluntarily. Before death, a believer should tame his innate desires by killing the demons inside him the demons of greed, lust, pride, and enmity. With the voluntary sacrifice of an animal, one should also sacrifice his lust for wealth and remind himself of the higher purpose in life.

The practice of Uḍḥiyah is for the sole purpose of bringing us close to the Divine reality, as the Jurists have mentioned its Maqāṣid is “taqarrub ila-llāh”, closeness to Allāh. Our acts of worship should be free from pretentiousness and be completely sincere, for the meat or blood has no value in the Divine sight, but what matters is our intentions, as the Qur’ān [4] points out:

“Never does their flesh nor their blood reach Allah, but your piety successfully reaches Him”. [22:37]

Moreover, the Prophet ﷺ stated: “Verily actions depend upon intentions” [5].

The sacrifice also signifies the importance of following the Sunnah of the Prophet Ibrāhīm (peace be upon him). We as Muslims should be mindful of treading the path of the beloved bondmen of Allāh and reaching the purest station of “Ụbūdiyah”. Even in these post-modern times, we should not abandon the ways of our pious predecessors, for our success is embedded in their Sunnah itself.

It would not be wrong to say that the ritual sacrifice is a spiritual link between the believer and his predecessors so that he may never forget their message and live a modern life deep seeded into the traditional ideology.

Another humanitarian aspect of the ritual sacrifice is that [according to the Hanafi school of Islamic jurisprudence, it is desired that] 1/3rd of the animal’s meat is to be given to the poor and needy people. Imagine when millions of people offer 1/3rd of their animal’s meat solely to give to the destitute; how many hungry stomachs will be filled.

“It would be delightful to behold if all of mankind, for even a day, practiced the Islamic sacrifice, and the world be ridden from plague of hunger altogether.”

I would like to end my words with these lines:

“The month of Ḍhul-Hijjah brings with itself the message of sacrifice, devotion, complete submission to the Will of Divine. Being content with the Divine Decree, re-connecting to the glorious past and following the path of the pious, as well as serving the Creation of the Almighty are also from its pearls of wisdom; Thus, we must welcome this blessed month by acknowledging these virtues and inculcating them into our lives.”

May Allah bless us all!

(Fardeen Ahmad Khan Razvi is an Oriental Research Scholar who has authored over a hundred articles and twenty-plus booklets on Islamic and other oriental subjects in Arabic, English, Urdu, and Hindi languages. His minor is in Computer Applications pursuing his Major in Data Science. He is also an eloquent Urdu poet coming from a Sufi background in Northern India.)