The Heart and It’s Value in Life and Tradition 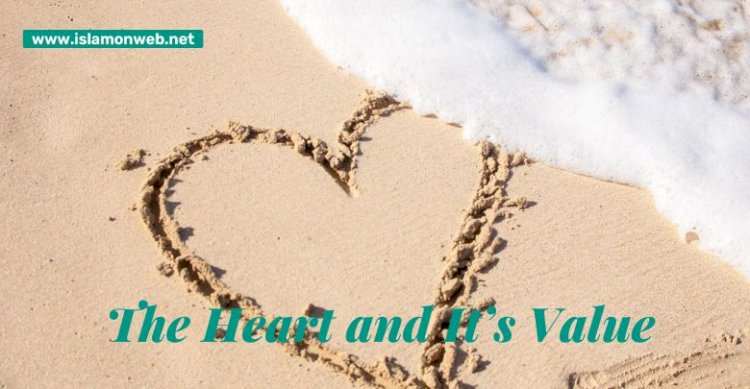 Holding an immensely profound position in the existent world, the heart is much more than a vascular organ. As a sanctified house of human emotions, idiosyncrasies of yearnings and Divine inspirations, the heart is rightly called ‘the king of organs’ in the Islamic tradition. Sufism, the esoteric branch of Islam, regards the‘ heart’ as a central figure in man's spiritual ascent. Countless treaties by the Sufi Masters have endured ages and continue, in modern times, to be a source of eternal wisdom on the mysteries of the heart. Let us, for a brief moment, escape from the illusory world of ‘the visible’ and plunge into ‘the unseen’ to discover the thriving cosmos of profound realities.

The Heart, called the ‘Qalb’ in Arabic, has the principal position and an evident role to play in the life of a sapient being. Early philosophers mark the essence of man as having three basic qualities of intelligence, free will and speech. The heart has a prime function in regulating all of these characteristics, philosophically speaking, it provides a counter-weight to the ferocity of intellect, acting as a leash lest it turns into a wild goose. It provides a shore to the raging sea of desires, thus modulating free will, and finally, it furnishes the requisites of any potent speech. Theologically, the heart keeps intellect from tumbling into the abyss of fanatical rationalism, a form of ‘reason worship’ where all tradition is discarded on shallow rational inquiry, no matter how short such a ‘reason’ falls to comprehend supra-rational realities. The heart moulds elements of human free will in conformity with the Divine Will, thus reaching true stages of ‘submission’, an ingredient without which no form of religiosity can survive. And lastly, the heart is the ultimate instrument which can receive Divine melody and reflect the same in human speech, an expression which stems from the heart, penetrates minds and ascends to the heights of the Heavens. The poet of the East, Iqbal[1] said:

“The discourse of the heart is indeed potent,

Wingless, though has the power to ascend”

Interestingly, the heart, as mentioned above, is called ‘Qalb’[2] in Arabic, meaning ‘to change’, alluding to the immense degrees of sensitivity of the heart to its surrounding environs. The word shares its roots QLB with ‘taqallub’ changing states, ‘muqallib’ the One who changes states of others - a name for Almighty - and even with ‘inqilab’ revolution, the word revolution itself having roots in late Latin revolutionem “a revolving” or bringing about a change of events. This meaning is reinforced further by the supplication taught by the Prophet of Islam (peace be upon him), acknowledging the dynamicity of heart, as: “Ya Muqallibal qulub, thabbit qalbi ‘ala dinik.” O turner of hearts, keep my heart steadfast on your Din.[3]

Change, here, can have various connotations, not only does it signify the frequency and intensity of change but also alludes to the hyper-responsiveness of the heart with regard to stimuli. Since only a certain type of receptive heart can appreciate the delicacies of fine arts, poetry and architecture, many of these disciplines enjoy a select audience, usually of the elite. Thereby highlighting that even though the heart is susceptible to ‘change’, there are degrees to how much a heart can change and its threshold to reach the same.  The Sufi master Abul Qasim al-Junayd (may his secrets be sanctified) beautifully points this out as: “A sincere believer’s state changes forty times a day, while the hypocritical show-off stays as he is forty years.” further elucidating the fact that some hearts are more receptive to stimuli than others, in the same way, that some hearts are more susceptible to change than others.

This self-evident dynamicity of the heart places it once again at a preeminent position in the hierarchy of organs. High degrees of change require high attention toward its states and utmost care in its nurturing. Being the king of organs, as Emily Dickinson’s famous quote goes, “The Heart wants what it wants - or else it does not care”, the heart can indeed influence the whole body, an individual’s life and ultimately, the lives of the masses. This primal position of heart was emphasized by the Prophet Muhammad (peace be upon him) in a beautiful narration which says: “Beware! There is a piece of flesh in the body, if it becomes good (reformed), the whole body becomes good, but if it gets corrupted, the whole body gets corrupted and that is the heart.” [4] Here, the whole soundness and (or) corruption of the body is reliant solely upon the condition of the heart, not only does a healthy heart reside inside a healthy body, but a healthy heart begets a healthy body as well. Capturing a driving position in the individual, the heart has continued to be the prime organ throughout history, even the word ‘heart’ having Old English roots in “heorte” meaning the soul or spirit-encompassing notion of being “seat of all mental faculties” and “seat of inmost feelings; will and emotions”.[5]

Before discussing phenomena pertaining to the heart, it would be beneficial to our discourse to mention the Sufi aspects of the profound organ. In Sufism, the heart is the sanctified abode of Divine remembrance “Dhikr”, it is also the vessel which can receive - and perceive, for that matter - Divine theophanies “Tajalliyat”. Akin to a mirror which accepts Divine luminescence and shines, illuminating itself and the milieu around. The pure heart, purged of all carnal desires, becomes an ore of ageless wisdom and a lantern of undying brilliance. Inasmuch as it is a fundamental receptor to theophanies, Sufis have called it the Throne of the Almighty Allah.[6] Much like the Divine Throne present in the macrocosm “al-Alam” is a dwelling place for Divine grace, this Throne residing in the microcosm “al-Anfus” too is richly penetrated by transcendental splendour.

The mental faculties of the human body can only define or interpret the stimulus originating from experience, it is the heart alone which can “feel” and “experience” these emotions. It is the divine grace flowing into the heart that makes it into an ocean of never-ending energies. Fist-full in its dimensions, the heart can endure colossal amounts of pain and suffering, yet still, manage to be kind and forgiving. It is this organ, from which flow the humongous tides of love, compassion and mercy, ceaseless in their nature and limitless in their potency. Historical accounts of men and women influencing thousands of lives through “love for all” and “service to all” are testament enough to the heart’s abilities in terms of numbers. All virtues come from the heart and interestingly culminate at the same, when we see an act of compassion, our heart senses goodness, likewise, when we perform an act of kindness, our heart rewards us with contentment.

It is, however, paramount to note that, even though King of organs, the heart is not immune to corruption. Being the forge of passion and emotions, the heart can be easily tricked into becoming a slave of its own desires. Greed disguised as Determination, Vengeance in the cloak of Justice and Desire in the garbs of Love can readily fool a heart into doing wrong, perceiving it as right. The lines between good and evil quickly start fading once the heart is deluded, and as a consequence, many lives are destroyed. Each wrongdoing has a profound effect upon the organ, just as Nietzsche said: “if you gaze into the abyss, the abyss gazes also into you”, similarly each sin corrupts the heart bit by bit, every time we skirt around the boundaries of good, the heart is seduced to cross the line. This befitting example from the Prophetic narrations is enough to expedite the meaning further, the Prophet of Mercy (peace be upon him) said: “When the believer commits sin, a black spot appears on his heart. If he repents and gives up that sin and seeks forgiveness, his heart will be polished. But if (the sin) increases, (the black spot) increases. That is the Ran that Allah mentions in His Book: “Nay! But on their hearts is the Ran (covering of sins and evil deeds) which they used to earn.” [7]

The reason why it becomes incumbent upon us is to keep our hearts under heavy scrutiny. Purifying this central organ is a tedious and cumbersome task which requires a lot of conscious effort, nonetheless, everything becomes easy through divine succour. It is done through purging the carnal desires and engrossing oneself in good deeds and remembrance of the Lord. As mentioned in the above-quoted Hadith, sincere repentance can wash away even the most stubborn of spots from the heart. Now, one must ask what happens when the heart is purged of all basal tendencies. The Qur’anic injunction points out that once the heart is purified, “success” is inevitable, as mentioned in the verse: “He is successful who purifies, And remembers the name of his Lord, so Prays.” [8] This success refers to all facets of known success, in the world and in the hereafter. The purified heart enjoys the bounties of transcendence from primal desires in the world and is raised amongst the righteous in the hereafter. He is free from worldly ordeals which befall the greedy and lustful and is also delivered from Hellfire which is the fate of the same.

Hence, it can be safely concluded that the heart occupies a fundamental position in human life and is important in achieving one’s worldly and spiritual success. It is also the prime instrument of transcendence and divine ascent. But we must beware not to leave it unsupervised, for it can be easily seduced to the dark and hence, purging it of basal desires becomes indispensable. A practice through which we can achieve true success in this world and on the Day of Judgment.

(Fardeen Ahmad Khan Razvi is an Oriental Author with over a hundred articles and some two dozen booklets on Islam and Oriental subjects to his credit, Written in Arabic, English, Urdu and Hindi. His minor is in Computer Applications pursuing his Major in Data Science. The author is also an eloquent Urdu poet coming from a Sufi background in Northern India)