Blasphemy and its Inimical Effects on Society 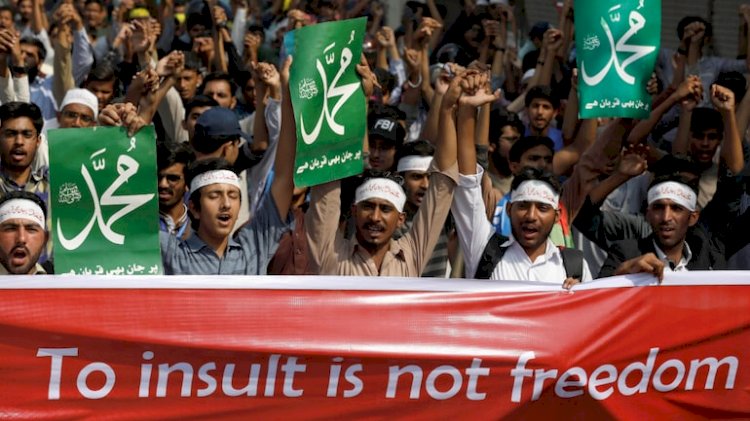 Every human being is allowed to express himself through different ways like writing and speaking and convey his thoughts and ideations to the rest of the world. This power to express has been bestowed upon him by none other than Almighty Allāh as mentioned in the Holy Qur’ān: “The Most Affectionate (Allāh)! He has taught (you mankind) the Qur’an. He created man. He taught him the discourse”. [55:3-4] Imam Ibn ul-Jawzi (d. 597 AH. 1201 AD.) says in the exegesis [1] of this verse that “the discourse” (al-Bayān) means that (knowledge) of everything or languages. It is evident that the origin of language itself has been given to man by his Creator.

By this logic, it does not make sense if someone uses the very same language to vilify or denigrate the Lord who gave him the power to speak in the first place. This leads us to arrive at our discourse for the day, that is, “Blasphemy”.

For centuries, thinkers have wrestled with what can be deemed “free-speech” and what guidelines should govern it. The Renaissance philosopher Baruch Spinoza is also believed to have championed “absolute free speech”, which in fact is not the case. Spinoza himself was a staunch supporter of civic societies, which include government and regulations on speech as well [2]. Absolutism in terms of free speech is indeed a fool’s game because no healthy society can ever thrive with people allowed to do absolutely anything and say everything they want, with no restrictions whatsoever. Rationally, how can a society survive with anti-socials, anarchists and insurgents allowed to spread their evil agendas, with superficial conspiracy theorists permitted to manipulate the masses? Such a civic community will come to a quick bitter end.

Hence, it is indispensable to have an institution that ensures people the right to express themselves and that they do not infringe the rights of others.

Blasphemy, in its most crude sense, has never been a part of free speech since Biblical times, humanity has despised those who have vilified a deity. With the advent of neo-atheism, people have started to legalize this vilification and demand license to blaspheme under the garb of their legal rights.

The correct approach to blasphemy is taken by Islam, stating that people should not abuse each other at all, and every person should be given his due dignity as a human being. We should speak with good words to people as the Qur’ān says: “and speak to people with good”. [2:83] The Prophet of Islam (ﷺ) also commanded: “Whoever believes in Allāh and the Last Day should speak a good word or remain silent.[3]” Furthermore, the correct definition of a true Muslim was given by the Prophet himself as: “A Muslim is one from whose hands and tongue people are safe.[4]”

Pragmatically, a religion that despises man-abusing man, for obvious reasons will never allow anyone to vilify his Sovereign and Sublime Creator, and therefore, the intense measures Islam has given for the eradication of this sin.

Let us observe the scenario from a psychological viewpoint. When a man abuses a person, it has detrimental repercussions on his own psyche. Numerous cases of self-hatred are deep-seeded into feud(s) which have taken the form of trauma. People suffer at the hands of these traumatic situations, which they fail to process and understand. Long suppressed hatred develops into existential depravity and loathness for everything around, nihilism and schizophrenia kick in, and that is when a psychotic cut-throat is born.

The Human Rights Commission has, in the strongest terms, condemned all acts of physical and verbal violence because every notion of racial and religious prejudice is deplorable.

People who champion blasphemy as a form of freedom of expression should pay heed that if their rebuke is associated with a particular religion, it has entered the collective conscience of millions who follow the same. And thus, to rebuke a religion is to condemn the whole society which associates with it. Similar is with Islam as if you vilify the Qur’ān, you not only disrespect a book but the Holy book of thousands of devotees; likewise, if you rebuke Prophet Muhammad (ﷺ), make his caricatures, or say bad things about him, you do not just dishonour a person but the Prophet of millions of people who love, respect, and look up to him.

Blasphemy is a form of verbal insurgency which depicts zero value for human emotion. People who rebuke, curse, and defame the religious values of others are, in a way, the verbal militia of our time. And this foul conduct can never be hidden under the guise of intellectual discourse. Intellectually, even in comparative religion never have people ever abused other religions they are comparing their own with. Such a form of scholarly discourse calls for unbiased remarks and the use of practical non-offensive jargon, not the kind of kindergarten foul play we are witnessing in our time, where people are writing defamatory books, making caricatures, and uttering abuses about religious entities loved and revered by millions.

This is sure to stir up religious zeal and might even result in an intense reciprocation. Modern-day blasphemers are not only hurting the religious sentiments of the masses but also knowingly or unknowingly causing religious extremism in many parts of the world. Militant groups will use their remarks to recruit new members to their organizations showing that “look how the world hates you and your religion, and you need to do something about it”.

One may wonder who is it these blasphemers are supporting? A free-speech democracy or anarchy?

The UN held a general assembly in 2005[5] aimed at “Combating religious defamation” where the body affirmed that it was “alarmed” at:

“the continuing negative impact of the events of 11 September 2001 on Muslim minorities and communities in some non-Muslim countries, the negative projection of Islam in the media and the introduction and enforcement of laws that specifically discriminate against and target Muslims.”

The international body also urged the governments to:

“take resolute action to prohibit the dissemination through political institutions and organizations of racist and xenophobic ideas and material aimed at any religion or its followers that constitute incitement to discrimination, hostility or violence.”

Thus, blasphemy against religious entities is never to be confused with freedom of speech, and that it is a heinous crime against the religious sentiments of millions of people and their collective human rights.

Having said this, I would like to end my discussion with these lines:

We should strive to make our civic societies anti-blasphemy and pro-tolerant towards religious entities, values, and ethics to achieve a sustainable, harmonious living ecosystem.

May Allāh bless us all!

Fardeen Ahmad Khan Razvi is an Oriental research scholar who has authored over a hundred articles and twenty-plus booklets on Islamic and other oriental subjects in Arabic, English, Urdu, and Hindi languages. His minor is in Computer Applications pursuing his Major in Data Science. He is also an eloquent Urdu poet coming from a Sufi background in Northern India.