“Harm Must Be Eliminated”: The Universal Islamic Legal Maxim - Part one 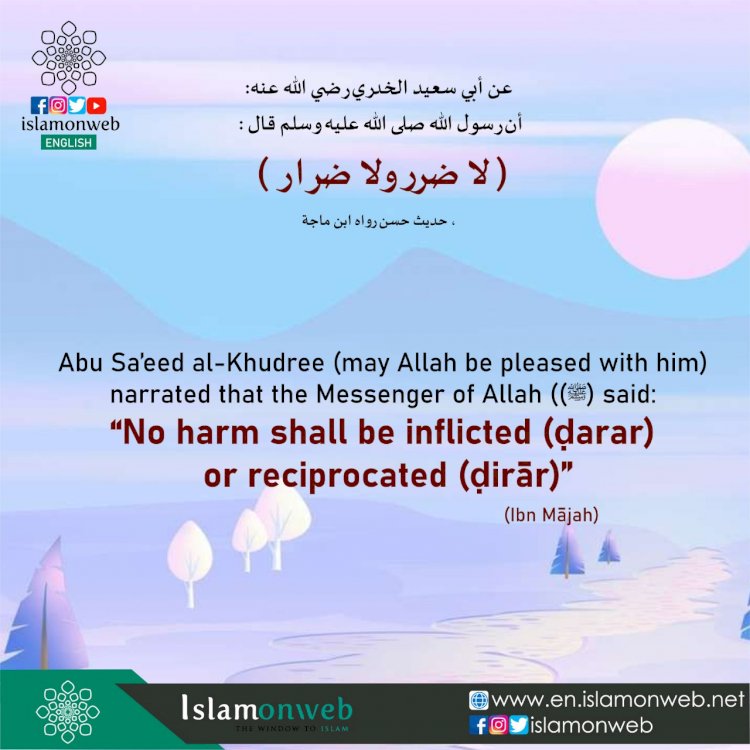 By the survey of traditional texts of the four sunnī madhāhib, we can find many cases in which jurists analysed the definitions of harm (ḍarar).[1] Among many, the major indications of ḍarar could be summarised as opposite of benefit[2], infliction of harm on others[3] and infringement of others’ rights.[4] Notably, some other scholars also viewed harm as the infliction of emotional distress for the reason that pain is a common element in all sorts of harm.[5] Incorporating the various implications of harm, contemporary scholar Aḥmad Mawāfī defined it as “the violation of the legitimate interests (maṣlaḥah mashrūʿah) of one’s own or of others caused by the infringement of rights, abuse of power or due to negligence on the part of others”.[6]

Not all harms are worth of consideration, rather jurists have posited certain conditions to decide whether an action or inaction is considerable harm or not. The major conditions are as follows:

The Sharīʿah posits restrictions when people engage in activities or participate in procedures that impose risks to others. In Islamic law, the command of harm elimination falls in the category of the obligatory, and it is actualised by its prevention before its occurrence and by its elimination after its occurrence. The ‘no harm’ maxim embraces mainly four elements; (1) non-infliction of injury, (2) prevention of harm and (3) removal of harm (4) minimisation of harm.[11] The mentioned hierarchical order is notable in handling conflicting interests.

[12] Accordingly, killing a dying patient is not an ethical choice to benefit his or her organs for saving others as per the maxim “repulsion of an evil is preferable than achieving a benefit”.[13] Likewise, if somebody damages the property of someone else, the harmed party has no right to damage the same property of the wrongdoer, because it spreads harms. He can instead hold the wrongdoer liable for loss and injury. On the other hand, when someone transgresses the limits set by the law, he will be punished by retaliation or compensation even though they could cause personal harms, which is according to the maxim “inflicting private harms to prevent public harms is permitted”.[14]

Prohibition of something results from the Sharīʿah’s recognition of its harmful effects. As a general rule of thumb, whatever is prohibited by the Sharīʿah is inevitably considered as harmful. A widely accepted theory in fiqh is that harmful situations result from the performing of that which is prohibited and from the negligence of performing that which is commanded.[15] How does the Sharīʿah recognise different levels of harms and how do people determine the degree of severity of different harms in order to deal with them appropriately? It is based on the text of the Quran and the Sunnah. For example, the seven major sins are considered as causing significant harms.

The ‘no harm’ maxim is embedded with several distinct obligations and priorities; they change according to the situations. In Islamic law, the duty of non-maleficence tends to be preferred to beneficence on many occasions and, however, there are situations in which vice-versa is also applicable.

Maxim of harm elimination governs innumerable juristic cases and scenarios. Some of them include the option to return an object of sale to the seller due to defect in it (khiyār bi al-ghayb)[16], retaliation (qiṣāṣ), various forms of interdiction for consumer protection (ḥajr), liability for destruction (ḍamān), right of pre-emption in sale transactions for the safety of the neighbour and the partner (shufʿah), atonement fee (kaffārah), annulment of marriage contract due to physical deficiencies such as impotency and financial shortcomings such as bankruptcy and so on.[17]

Read it: Glad tidings from a revert to the world

Though the maxim in its final wording, which is al-ḍarar yuzāl[18] (harm must be eliminated) is not found in earlier fiqh texts, the jurists had explicated the ‘avoidance of harm’ as justification for allowing certain acts in their legal rulings.[19] According to some reports, al-Qāḍī Ḥusayn al-Marrūzī is the first known person to formulate this maxim in its final wordings.[20]

One of the most important evidence for the maxim on harm elimination is the ḥadīth which states that “no harm shall be inflicted (ḍarar) or reciprocated (ḍirār)”.[21] This ḥadīth enables us to draw multiple interpretations with living relevance to modern times. Regarding the difference between ‘ḍarar’ and ‘ḍirār’, some scholars are of the view that the latter is an emphasis of the former while a significant number of scholars hold that the latter has a different meaning altogether because giving it a new meaning is preferred over emphasising on an already existing meaning.

Two phrases are most often cited when referring to harm elimination. They are:  (1) “Harms must be eliminated” [28] and (2) “No harm shall be inflicted or reciprocated”.[29] Some scholars refer to “Harms must be eliminated” as the main maxim on harm elimination and consider the ḥadīth “No harm shall be inflicted or reciprocated” as legal evidence for it. Other scholars consider the ḥadith as the universal maxim on harm elimination and the other phrase as its sub-maxim, because ḥadith serves as a maxim as well as the evidence simultaneously.

This maxim ultimately stresses the aspect that human beings are highly honoured by their Creator in a way that elevates them from being illegitimately inflicted with any harm.[31] Negligence in taking steps to remove existing harm implies an implicit endorsement of the infliction of the harm which is incontrovertibly prohibited in Islam.

Furthermore, al-Shaṭibī has categorised the legitimate acts, using the benchmark of its involvement of harm, into eight types and explained their legal rulings; the details are as follows.[32] Obviously, (1) the legally valid and non-maleficent act, which is meant for either achieving benefit or preventing evil, is allowed categorically. However, if it involves harming others, the intention of the doer becomes the deciding factor, (2) so if the doer has the intention of inflicting harm, it is prohibited unless he is compelled to do so and he has no other way to deal with the situation.

The sub-maxims (also called sister maxims or auxiliary maxims) are classified, based on the functions they perform, into restrictive maxims, emphasiser maxims, and representatives of an aspect of the main maxim. Having studied the maxims relevant to harm elimination, the researchers divide all maxims concerning harm elimination into three types. It is worth mentioning here that some maxims fall into more than one category and they are employed according to the need and the context. The categories are as follows:

(This article is part of a research work which was originally published in Islamic Quarterly, UK December 2019).

[11] In the secular ethical concepts, some philosophers include the removal of harm under non-maleficence and prevention of harm under beneficence. Beauchamp and Childress, Principles of Biomedical Ethics, 2001: 115.

[12] However, this hierarchical order is not universally endorsed in secular morality or ethical theory. Beauchamp and Walters, Contemporary Issues in Bioethics, 30.