The Universal Prophet: Was Muhammad ﷺ the Prophet of Arabs alone? 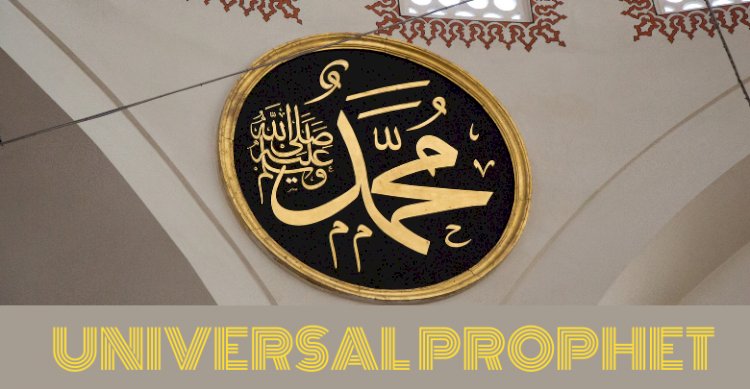 The epicentre of boundless love and colossal reverence for billions of people around the globe; All of whom aspire to know his life, memorize his words and follow in his footsteps. A personality that even adversaries testify to his truthfulness. A peacekeeper who transformed sworn enemies into staunch brothers, who influenced the lives of countless people. The one who gave women their due respect in the society, who revived lifeless human values of civilization, who conveyed the message of Allahﷻ, the Almighty himself. The Best of Creation, the Leader of Mankind, the Man, the Prophet, the Beloved of his Creator, the Pinnacle of Excellence, Yes! Today’s discourse is about the heartbeat of this very cosmos, His Eminence, The Prophet Muhammad ﷺ.

Since the late 18th century, European scholars have taken a keen interest in Islam, its source scriptures, and its Prophet's Life. With the advent of new Orientalism, much has been written on Islamic motifs, usually with a prejudice, deep-seated into religio-cultural and racial chauvinism. Wistfully, the scholars of such assortment spent their lives trying to besmirch their subjects instead of unveiling truths about them. Permeating lies, spreading misinformation and raising partisan doubts about Islam and its Messenger, these academicians contributed to creating an enigma around the Prophet ﷺ whose life has been the most crystalline and preserved one in all of humankind.

One such fabrication is that “Prophet Muhammad ﷺ was sent as a Prophet to Arabs alone”. The excellent notion behind this is that since the claim is He was a Prophet to the Arabs, or rather, more broadly, the Orient, there is no need for the Occident to follow his path. Thus, alienating Islam from the West and widening the gap between the truth and the Occidental masses. In today’s discussion, let us investigate the soundness of this claim.

We will be looking at arguments debunking the same from three dimensions:

The universality of the Prophet:

It is seldom claimed that because the Prophet Muhammad ﷺ was an Arab and the Qur’ān also says: “Indeed We have sent down an Arabic Qur’ān, so that you may perceive.”[1], hence the Prophethood of Muhammad was limited to Arabia. The contradiction here is the same evidence "Qur’ān” which is being presented here to attest the claim is itself filled with verses which confirm the universality of the Prophet Muhammad ﷺ. Let us look at them one by one.

“Say (O dear Prophet Mohammed ﷺ), "O people! Indeed I am, towards you all, the Noble Messenger of Allah.”[2]

Imām Faḳhr al-Deen al-Rāzi says in his exegesis “Mafātīh al-G̣haib”, under this verse: “This verse confirms that Prophet Muhammad ﷺ was sent as a Prophet to all of the creation, unlike the claim of some Jewish groups which proclaim that he was only the Prophet of Arabs. The address used in the verse: “O People!” encompasses all mankind.”[3]

Imām Ibn Jareer Ṭabrī says in his exegesis “Jāmẹ ul Bayān”, under this verse: “Here the Prophet Muhammad ﷺ is commanded to proclaim that: O People, I have been sent as a Prophet to each one of you, unlike other Prophets who came for specific nations, there were Prophets who were sent towards particular communities as well but I am not like them and my Prophethood is towards all of you.”[4]

“And We did not send you (O dear Prophet Mohammed ﷺ) except as a mercy for the entire world.”[5]

Imām Ibn Jarīr Ṭabrī narrates from Ibn Ạbbās (Allah is pleased with him) regarding this verse: “Indeed Allah the Almighty sent Prophet Muhammad ﷺ as a mercy unto the whole world, which includes believers and non-believers, as Allah gives guidance through him and admits, whoever believes in him and follows him, into paradise”.[6]

From the above discourse it becomes evident that according to the Qur’ān, Prophet Muhammad ﷺ was sent towards the whole world, including Arabs and non-Arabs alike. Which correctly implies the Universality of his Prophethood.

The universality of the Message:

The characteristics of the Messenger can be known by the nature of his Message; for instance, if a Prophet is sent to a particular nation, say Banū Isrāīl (Sons of Jacob), then the message brought with him will have commandments unique to the nation of Banū Isrāīl. Similar is true for other nations as well. As the previous Prophets were sent to specific communities and their preaching was exclusive to them. Keeping this in mind the following points are to be noted:

Now, just think about it, in a nutshell, the Qur’ān has addressed all of mankind, the Believers, the Disbelievers, the People of the Book, the Sons of Isrāīl etc., Is there anyone in the whole world who escapes all the aforementioned categories? Definitely not! This is clear evidence of the Qur’ānic message being universal to every single human being; therefore, the Qur’ān calls upon all of mankind to accept its Divine message.

Hence, if the message is universal, it is pivotal for the Messenger to be Universal in his Messenger-ship as well. And such is the case here that Prophet Muhammad ﷺ was sent with a Universal Message “the Qur'ān”, so it is undeniable that his Prophethood also is Universal and extends to every single human being.

There are inexhaustible and indisputable historical data to disprove the assertion that Islam came only for Arabs. It is the inclusive nature of Islam that no matter what cast, colour, creed or country a person belongs to, he can be as Muslim as any of his pure-blooded Arabian counterparts. Even in the time of the Prophet Muhammad ﷺ, people with diverse backgrounds accepted his Message. To name a few: Bilāl from Ethiopia, Suhaib from Rome, Salmān from Persia, a former Christian, Ka’b al-Aḥbār former Jew Scholar, Ạbdullāh bin Salām former Jew etc. (Allah is pleased with them) This shows the Universal appeal of Prophet Muhammad ﷺ and the message he was sent with.

Furthermore, When Muslim caliphs expanded the boundaries of the Islamic caliphate from the plains of South Africa to the rocky areas of Greater Persia and from the cities of Spain to the deserts of Yemen, people of different ethnicities, creeds, colours and cultural backgrounds accepted Islam with open arms. Be it the Berbers of Africa, the Pashtuns of Afghanistan, the Persians of Iraq and Iran, the Greeks of Albania, the Huis of China, the across-the-mountain dwellers of Uzbekistan, the people of the Indian sub-continent, the Javanese, Balinese, Sumatran, Moluccan of Indonesia, the Dhivehins of the Maldives, the Serbs, the Bulgarians, the Chechens, the Moroccans, the Mallis, the Mauritanians, and even the Mongols of Mongolia, all of these and many other diverse ethnic communities accepted Islam liberally. It is absurd to even imagine that a message which is labelled to have been sent for Arabs alone was accepted so flawlessly by such a multitude of non-Arabs and became an indispensable part of their lives. Similarly, the same folks accepted the Prophethood of the Beloved Prophet Muhammad ﷺ with open arms.

This is not some hagiographical account of Islamic history; rather it is the data readily present over the internet to be looked up by anyone. And it is the practical validation of all that we have asserted under the first two headings, further strengthening our refutation of the claim that the Prophet was sent towards the Arabs alone.

In the end, I would like to state that Islam is a religion that never was or will be outdated no matter the century or millennia, for every century is Islam’s century. And the Prophet of Islam, Muhammad ﷺ, is not just the Prophet of Arabs, but the Leader, Teacher and Ideal Role Model of mankind as a whole. He is the final and the greatest Prophet sent by the Almighty, and His Message is the final revelation to descend towards this world. Hence, the only way to enter paradise and attain salvation is by accepting his Message and following his commandments, ultimately the commandments of Allah the Almighty himself.

May Allah bestow upon us the true love of his Beloved ﷺ. Ameen!

(Fardeen Ahmad Khan Razvi is an Oriental Research Scholar who has authored over a hundred articles and twenty-plus booklets on Islamic and other Oriental subjects in Arabic, English, Urdu and Hindi languages. His minor is in Computer Applications pursuing his Major in Data Science. He is also an eloquent Urdu poet coming from a Sufi background in Northern India)