The Prophet ﷺ: The Ideal Teacher 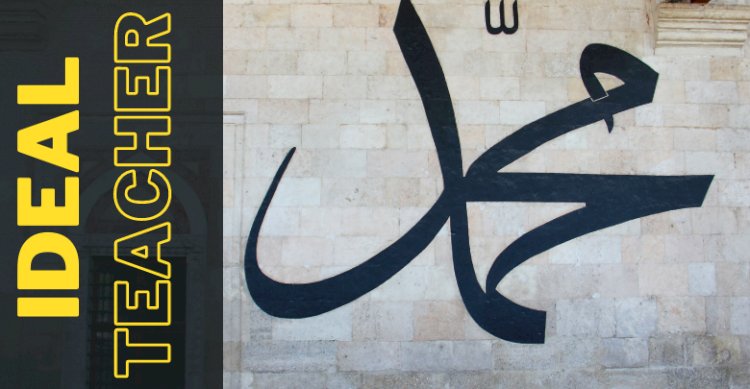 Let some incidents talk before I make comments on Prophet’s ﷺ teaching style. According to a hadith narrated by Abu Hurairah (R), a Bedouin came and stood urinating in the mosque. The Companions of the Messenger of Allah said: 'Stop it!' but the Messenger of Allah said: "Do not interrupt him; leave him alone." So they left him until he had finished urinating, then the Messenger of Allah called him and said: "In these mosques, it is not right to do anything like urinating or defecating; they are only for remembering Allah, praying and reading the Qur'an,". Then he commanded a man who was there to bring a bucket of water and threw it over (the urine), and he did so.” i Prophet ﷺ did not get angry with that man, but he taught him how to behave in Masjid.

In another incident, Mu'awiyah ibn al-Hakam al-Salami, a man living in a desert, who was unaware that it is forbidden to speak during the Prayer (Salāh), says: while I was praying behind the Messenger of Allah ﷺ, a man sneezed, so I said 'yarhamukallāh' (may Allah have mercy on you). The people glared at me, and I said, 'may my mother lose me! What is wrong with you that you are looking at me like this?' they began to slap their thighs with their hands, and when I saw that they were indicating that I should be quiet, I stopped talking. When the Messenger of Allah ﷺ finished praying- may my father and mother be sacrificed for him, because I have never seen a better teacher than him- he did not rebuke me or hit me or put me to shame. He just said: this prayer should contain nothing of the speech of men; it is only for takbīr and recitation of the Qur’ān.”ii Look at the approach of the Prophet ﷺ toward that man. How it affected him is seen in his words, 'I have never seen a better teacher than him.

The majority of his students were not from the educated group but laypeople. However, he magnificently handled them and instilled knowledge. These incidents are better examples of it.  He taught both excellent characters and others how to deal with people gently and with compassion. He not only focused on content but also on creating good men.

Explaining his mission as a teacher, the Prophet ﷺ says: “I am sent as a teacher’’iii. This mission is further explained:” I am sent for the completion of the noble characters.iv This tradition has an intimate relationship with the ideal mission of Islam. Islam aims at producing an ideal man. The word ideal man has to be understood in its comprehensive sense. The goodness of a man is determined according to his performance in various fields extending from his personal life to familial, social, political, and economic spectrums. A man will be called an ideal man only if he retains the quality of goodness in all these aspects. The concept of Islām as al-Dīn, which is rendered the translation as "the way of life", opposite the western concept of religion, encompasses whole aspects of life; all fields that a man faces in his life from cradle to death.

According to Islām, a man will not be ideal or good until he does justice to his own body, family, society, state and the whole creatures of Allah. Only at that time, he becomes qualified to perform his duty as the Khalīfathullāh (representative of God) on the earth. So, Man is not only bound to be just to his body or the mankind but also to the whole creatures of Allah.

The points mentioned above demonstrate that the Prophet's mission as a teacher cannot be confined to any particular field of knowledge or a specific group of students; rather, it encompasses the community as a whole and all aspects of their life. Furthermore, all the Companions sitting in front of him were supposed to be the beacon lights of Islām and the teachers of the whole humankind coming after them. They were to be prepared to actualize the Prophetic command “those who are present here, they should inform those who are absent”. vSo, every member of the Muslim community was obliged to seek knowledge and to perform his duty. In order to accomplish this objective, the Prophet ﷺ disseminated knowledge upon every member of his community irrespective of age and gender. Nobody was excluded from that process. He even gave special lectures to women when they complained to him that they would not get enough time to learn from him because of men. So, in terms of the addresses of the teaching, the whole community was admitted to his school.

As far as the emphasis of the teaching was concerned, it was entirely in connection with the Prophetic mission of teaching, which was aimed at producing an ideal and balanced society in which all the ingredients of a proper community is well combined. Faith in One God was the first concern of the Prophet ﷺ, and it was considered as the cornerstone of his teaching. At the early stage of his mission, he made a great effort to establish their faith in Allāh firm. The divine rule which made the night prayer compulsory upon the believers was an excellent example for it. About one year, the Muslims practised it with the Prophet ﷺ as a compulsory rite. This practice helped strengthen their belief and face the fierce challenges of Makkan life. Once the faith dimension was clear, the Prophet ﷺ, gradually, started equipping them in other aspects. The implementation of zakāt, prohibition of wine, prohibition of interest, the establishment of the Islamic state, establishment of ruling for crimes like stealing, drinking wine, committing adultery, etc., could be considered in this sense. One of the most significant features of these implementations was that the Prophet ﷺ was ultimately successful in their functioning among the society, which points out to the effectiveness of the Prophetic teaching. There is a multitude of examples that describe the people coming to the Prophet ﷺ wholeheartedly confessing their mistakes and requesting him to implement the law upon them.

All the points mentioned earlier demonstrate that the Prophetic teaching was social constructive and social engineering. He really constructed a well-balanced society that is spiritually, mentally, and physically strong and capable of carrying out their duty as the representatives of Allāh on the earth.

Another significant point in the Prophetic teaching is that it was neither based on any particular syllabus nor did it address any particular group of students, whether in age, taste, background or intellectual level. Therefore, every day, he had to face new problems, making teaching a challenging duty. This difficulty in handling is an important point that should be considered while evaluating the Prophetic teaching. However, the change that the Prophet ﷺ brought in his community shows that he could overcome these problems and win their hearts.

He understandably conveyed his messages. While speaking, he would explain them well, and the listeners were able to memorize them. According to Aishah (R), when the Messenger of Allah ﷺ would speak, a person listening to him could count the words on his fingers.vi

He never bored the listeners. His speeches and talks were by looking at the context and the mindset of the people. He did not deliver marathon lectures. Abdullah ibn Mas'ud narrates: “the Messenger of Allah ﷺ used to preach to us at intervals during the days, lest we should become bored.” vii

He was able to read the people correctly and evoke their subconscious minds. Once a young man came and sought permission to commit adultery. The Prophet did not insult him but told him to sit down and then politely asked whether he was willing to do the same with his mother, daughter, sister or paternal aunt. The man said ‘no’. Then the Prophet ﷺ told him that every woman you try to commit adultery is mother, daughter, sister or aunt of some people. As you do not like it for your relatives, they do not like it for theirs. Then the Prophet ﷺ put his hand on the man's chest and prayed:  "Oh Allāh forgive his sin, cleanse his heart, and make chaste his private parts." After that, the young man had new and clean life, staying away from all evil actions.

This was his teaching style. He directly touched their hearts. He taught them it is equally important to own noble characters as we own knowledge. He was an ideal teacher who was aware of his mission. He was conscious that his teaching must be effective. He always looked at the context and accordingly employed various styles that help him convey his messages as intended.

Mohammed Suhail EM al-Hudawi is a PhD scholar, Dept. of Philosophy, at the University of Hyderabad.