Islamic Ethics and the Role of Imām al- Ghazāli 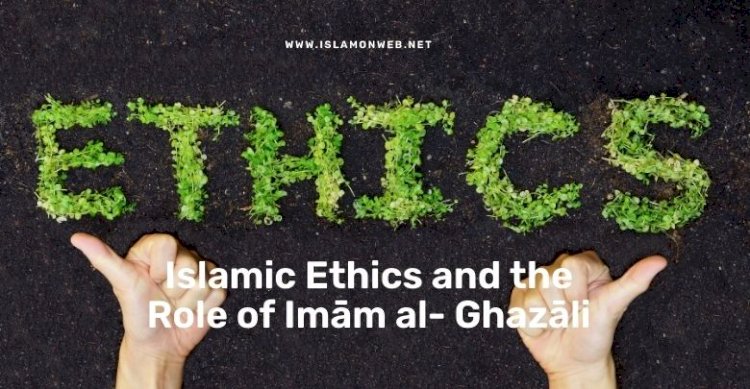 The concept of ethics is derived from different aspects such as religion, culture, philosophy etc. It deals with moral issues. The great classical philosophers like Aristotle contributed to shaping the style of ethics, and they laid the foundation for the western approach to the same. In the courses of history, it was designed according to specific cultures and civilizations.

In the seventh century, when Islam was spread all over the world, a new alternative for moral thought emerged along with it, based on the Holy Qurān and the teachings of the Prophet. Throughout the following centuries, many Muslim philosophers tried to elaborate on the theory of Islamic ethics. Among them, Imām al- Ghazāli, the great philosopher of the eleventh century, carries the prestigious position. As an Asharite scholar, he illustrates the concept of ethics as a religious law without measuring reason as the only path for generating ethical theories.

Al- Ghazāli was one of the most celebrated Muslim philosophers, who lived in the medieval period and authored a lot of works including mīzanal-ʿamal and Iḥyā’ʿulūm al-Dīn.

We can define ethics as the moral principles that govern a person’s behaviour or conduct of an activity. In other words, it is a branch of knowledge dealing with moral principles.[i] The term “ethics” is derived from the Greek word “ethos”, which means custom or character. Ethics is a branch of philosophy that studies the righteousness and wrongness of human action. Especially it is considered with the question of how human beings ought to act and the search for a definition of right conduct and good life. That is why the attempt to seek “goodness” through the aid of reason is the traditional goal of the ethicists.[ii]

If we scrutinize the world of ethics, we may not be able to find a single absolute definition of ethics because it, as a discipline, is constantly evolving as a result of the change in the socio-cultural and political context. Let’s take the example of two different periods. In Greek tradition, ethics was understood as relating to the concept of a good life. Hence, the ethical inquiry during the ancient period was shaped towards discovering the nature of happiness. Precisely, Aristotle’s Nichomachean ethics not only presents a theory of happiness but also throws light on how humanity can attain happiness.

Allah uses in the Quran the term khuluq, “And You (Muhammad) are on an exalted standard of character.” [iii]Khuluq or character has been recognized as the state of the soul that determines human actions. Meanwhile, it is neither the soul of a person nor his actions. Such character could be acquired through training and practice of good behaviour.

In addition, the difference between the words “character” and “action” is that the former is the internal and hidden state of the soul, while the latter is its external manifestation. The character or akhlāq is the inward cause while the action is its outward demonstration. A good character, hence, begets good action, whereas a bad character yields bad actions, as we know. Al-Farābi was to be known as the first great Muslim philosopher who noticed the interrelation of akhlāq or the state of the soul with human action.[iv] He described Akhlāq as a science that studies the state of the human soul.

Ibn Miskawayh, another Muslim philosopher, defined it in his work Tahzib al-Akhlaq, as ‘a state of the soul that causes it to perform its actions without thought or deliberation’. Later, many scholars like al-Ghazali, Fakhruddīn al-Rāzi (d. 1209), al-Tusi (d. 1274), al-Dawāni (d.1502) defined akhlāq as the science of the human soul. Ibn Taymiyyah defines ilm al-akhlāq as a science that seeks to know which actions should be done and avoided. It is a practical science meant to be applied.

In a nutshell, it is the science of the human soul that defines the characteristics and qualities of the soul, as well as the methods of how to control and moderate them. It is important to note that the goal of Islamic ethics is to maintain good behaviour by doing good actions and give up the wrongness of the heart by avoiding bad actions.

The primary sources by which Islamic ethics is lied on is the holy Quran and sunnah. Though these two sources are considered as scriptural morality, there are a number of elements and ethical terms described in the Quran, such as al-khayr (the goodness), al-birr (the righteousness), haq (the truth), maurūf (the good deed) etc. Also, there is a special description for actions like swālihāt, which means good actions and sayyiāth, which is bad. Almighty admonishes the whole living human being to do good. It prohibits the bad as he warns those who do evil things about the punishment. This system makes the person aware and responsible for his actions.

Theology forms another source of Islamic ethics. The theologians discussed the genesis of ethical knowledge, the basis of moral obligation, and the meaning of ethical terms. They have responded to the questions of human responsibility, human freedom, and divine justice with different levels of understanding.

Another source of Islamic ethics is fiqh, or Islamic jurisprudence. In this section, scholars discuss the normative questions related to shariah, and each finds his answer based on the Quran and Sunnah. Also, we have to consider Islamic mysticism as a source of Islamic ethics. Although it is dealt with the ecstatic experience of union with God, it also promotes and plants better seeds of goodness in people’s minds. Many mystics had written about the purification of the heart.

Al- Ghazāli has examined the psychological nature of man and found that all psychological phenomena in a man originate in the Self. He called this Self qalb, which is the essence of a person. Also, it is the spiritual entity that abides in his physical body and controls his organic and physical functions. [v]Qalb (heart), rūh (soul), nafs (desire-nature), and aql (reason, intellect) are the four terms included in the concept of Self according to al- Ghazāli.

The Self fulfils the needs of the body with the help of two powers, namely muharikah and mudrikah or the motor and sensory powers.[vi]  The motor power forms the propensities or baithul harakah and impulses or qudrah.[vii] Appetites and anger are two items of the propensities namely quwah al- shahwāniyah and quwah al- galbāniyah. The appetite tries to maximize the benefit and goodness for the body, such as hunger, thirst etc. The anger urges the body to be distant from the harm. Impulse is a source of power in muscles, nerves, and other tissues that move the organs at the behest of appetite and anger.

Mudrikah is the power of the apprehension which perceives and takes cognizance of what is hazardous and what is good for the body.[viii] Apprehension is comprised of outer senses and inner senses. The outer sense is hearing, touch, smell, taste, and sight with its organs. The inner senses include[ix] common sense, imagination, reflection, recollection, and memory.[x]

Mohammed Muneer P is a student, M.A History at the University of Calicut.

[i] Definitions from the Oxford Languages.

[ix] This description is based on Ihya.  In meezanul amal Ghazāli makes a little difference as he made hiss mushtarik as a part of khayal and added wahm into the inner senses.